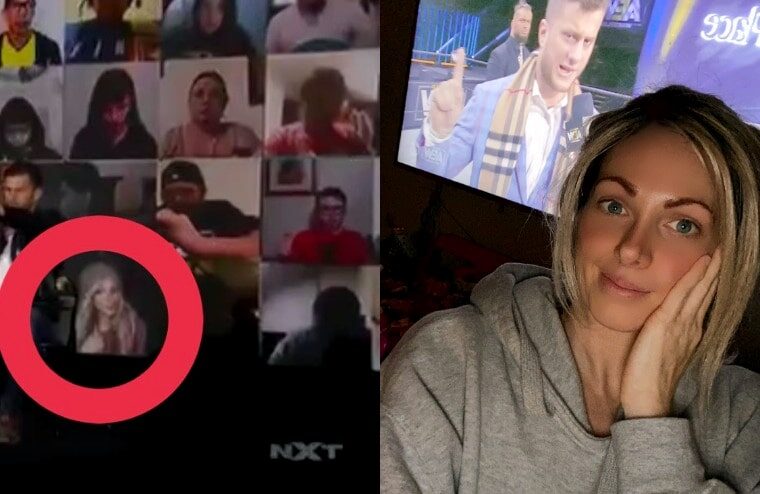 Twitter user Jessi Davin is known on the platform as an AEW superfan and was watching the anniversary of edition of Dynamite last night. So it must have come as a shock when she was made aware she was visible on that evening NXT’s, that was airing at the same time. She’d post the below video on Twitter, drawing attention to this.

When a fan registers for the WWE ThunderDome, they have to agree to a wall of text where WWE owns the footage, can edit it as required, air it around the world, and they won’t receive any payment for this. You can read an excerpt below, which shows that Jessi did agree to this when she signed up and could even appear in a future video game.

By participating in WWE ThunderDome and inputting your name below, you certify that you understand you will be photographed, videotaped or otherwise recorded (video and/or audio) by WWE (“Footage”). You grant WWE the sole, irrevocable and exclusive right, including the right to authorize others, to use and incorporate the Footage, in whole or in part, in conjunction with other photographs and Footage, and the right to use your image, name, screen name, voice, likeness and/or biographical information (collectively, “Likeness”) in connection with the exploitation, advertising, promotion and/or packaging of the Footage or any WWE initiatives, promotions or campaigns and/or any product into which the Footage may be incorporated, including but not limited to, inclusion as part of the WWE ThunderDome of another WWE program, editorial, commercial, trade, print, advertising, promotional, radio, television, home video, motion picture programs, sound recordings, video games, social media related activities and games or for any other purpose at such times and in such manner as WWE may elect throughout the world in perpetuityWWEThunderDome.com

This is probably a smart decision for WWE when you consider so-called fans have trolled them with offensive content in the past, and this allows them to get the reactions they require.