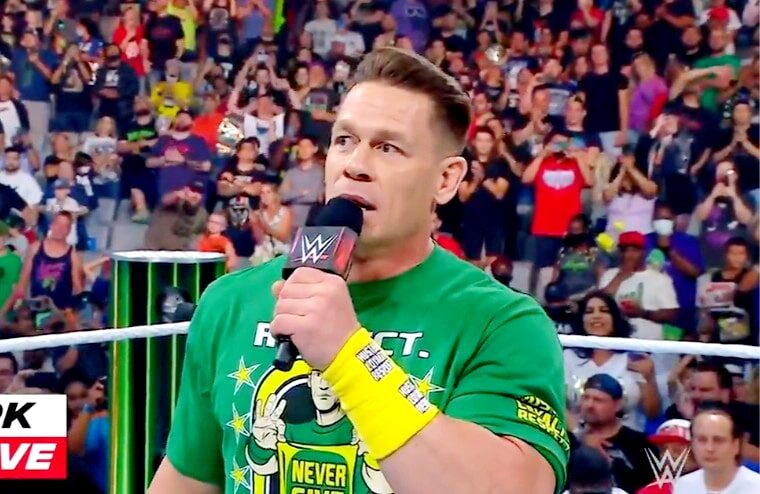 After his victory against Edge in the main event of Money In The Bank, Roman Reigns would begin cutting a promo about the whole world acknowledging him. During this, he would be interrupted by John Cena’s music hitting and the WWE legend would make his return to the company to a monstrous pop. Once he entered the ring, he’d make the “You Can’t See Me” hand gesture towards Reigns, which Reigns no sold. The show would go off the air with both men in the ring, and while there wasn’t an actual confrontation, it was clear a match against the two is happening at SummerSlam.

Once the show was off the air, a delighted John Cena would address the fans in attendance, saying it felt weird as he was used to fans telling him he sucks. He would also point out a sign in the audience that said, “if Cena shows up, we cheer” and called it Bizarro World. He’d then say he isn’t back for a one-night-only, and he had missed the fans. You can watch this for yourself below.

Cena last appeared on a WWE show at WrestleMania 36 and has since been focusing on his acting carrier, most recently filming Peacemaker for HBO Max. Additionally, he has been promoting the movie F9, which he stars in alongside Vin Diesel and has grossed over $590 million worldwide since its initial international release on May 19, 2021.

Earlier this year, he commented on his part-time WWE status in an interview earlier this year by saying he has become what he despised. This was in reference to when he famously called out The Rock for being a part-timer. The real-life situation eventually resulted in two huge WrestleMania matches between the pair. Cena has since gone back on what he said about The Rock, calling it the “stupidest stuff ever” and that he was looking at it through blinded eyes at the time.