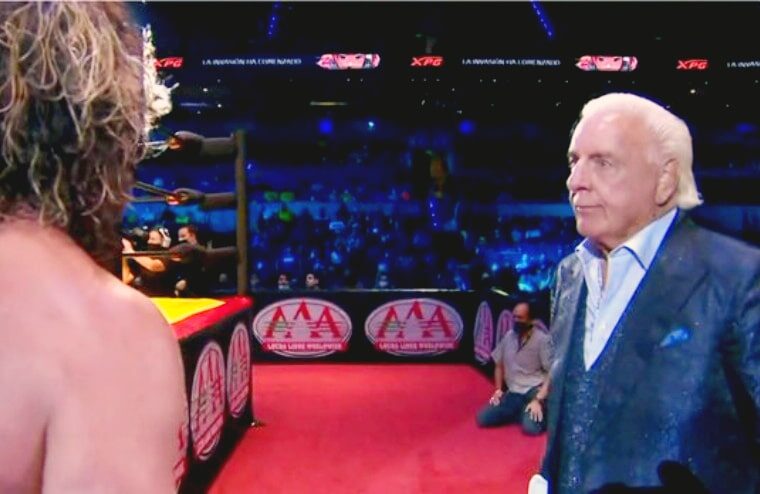 Ric Flair left WWE two weeks ago following a text conversation with Vince McMahon over Charlotte’s booking. Flair himself says he asked for his release, although it has been claimed McMahon actually fired him. Regardless of the circumstances of his departure, he is now a free agent. Now during AAA’s biggest show of the year, TripleMania XXIX, he has made his first post-WWE appearance, accompanying his future son-in-law Andrade El Idolo for his AAA Mega Championship match against Kenny Omega.

72-year-old Flair would get physical during the match after preventing Omega from hitting Andrade with the title belt. He and Andrade then took turns chopping Omega. Next, Flair would chop down Konnan, who was in Omega’s corner, and Flair would put Konnan in the Figure 4 while Andrade did the same to Omega. However, shortly afterward, as the referee was clearing the ring, Omega would hit Omega with the belt and then a One-Winged Angel for the victory.

In recent years Flair has been in poor health due to a heart condition called alcoholic cardiomyopathy. Plus, in 2017, he had a piece of his bowel removed, resulting in kidney failure and dialysis. Thankfully, he recovered and was medically cleared to get physical in the ring while still with WWE. Despite this, McMahon would refuse to allow Flair to take bumps due to deeming it too risky.

With Andrade being signed with AEW, speculation is bound to increase that Flair will soon be joining him in Tony Khan’s promotion, and he will undoubtedly add to Andrade’s package based on their work at TripleMania. Flair has previously stated he never intends to retire from wrestling, and if he were to join AEW, he would be reuniting with fellow original Four Horsemen Arn Anderson and Tully Blanchard, as well as one of his greatest ever rivals, Sting.