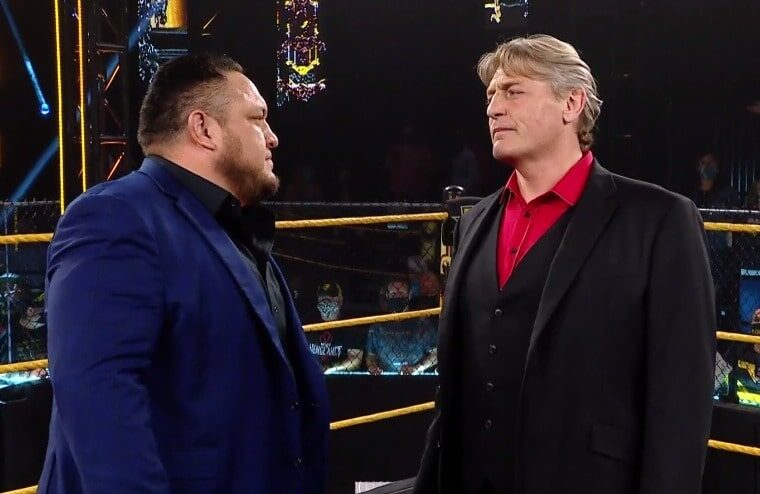 Samoa Joe was released in April by WWE after the company reshuffled their commentary teams. He’d moved behind the announce table after suffering two concussions in early 2020, and with him now deemed surplus to requirements, he was let go. However, it’s believed Triple H did not agree with this decision, and following a meeting at the Performance Center, he was brought back and quickly put on NXT. His return to the brand would see him become an authority figure as General Manager William Regal’s enforcer.

To have the role, Joe had to agree to not be a competitor in the storyline and not lay a hand on anyone unless provoked. This was clearly done to explain the lack of Joe’s physicality due to not being medically cleared but still build towards an eventual match with Karrion Kross. It now appears that Joe has been medically cleared, as during Wednesday night’s tapings set to air next week, a match between the pair was announced.

This was done by Joe tendering his resignation as an NXT authority figure so he could wrestle Karrion Kross for the NXT Championship at NXT Takeover 36 on Sunday, August 22. Regal would subsequently agree and signed the paperwork making it official. Later in the show, Kross would be confronted by Joe during a promo. Joe would end up beating up several security guards, but Kross would escape.

While it isn’t confirmed, it seems likely that Joe wins the NXT Championship as Kross debuted on Raw earlier this week and is expected to become a regular on the brand. Surprisingly though, Kross’ main roster debut wouldn’t be a monumental event. Not only was he not accompanied by his valet Scarlett, but he would also lose to Jeff Hardy in under two minutes. It has since been speculated that this was done by Vince McMahon to test Kross before WWE gives him a significant push, although it has undoubtedly taken some of the shine off the NXT Championship.