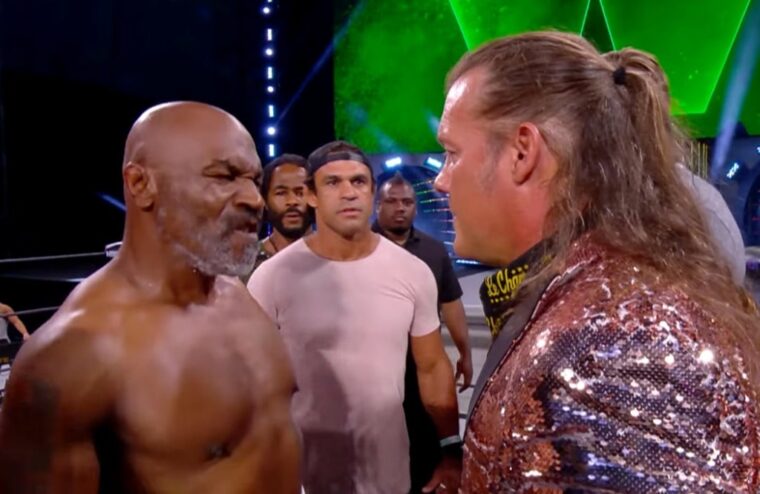 Mike Tyson was in attendance at last year’s Double or Nothing pay-per-view to present the TNT Title to Cody Rhodes after he defeated Lance Archer. Subsequently, he would make an appearance on Dynamite along with his entourage crashing an Inner Circle pep rally on Dynamite. This was meant to begin the build for a match between Tyson and Chris Jericho, although when Tyson signed a massive money contract to fight in an exhibition boxing match against Roy Jones Jr., it blocked AEW’s plans. Now though, AEW has announced that the former undisputed world heavyweight boxing champion will be on this Wednesday’s episode of Dynamite.

AEW hasn’t revealed the purpose of Tyson’s appearance, although it will undoubtedly aid them in the ratings battle with NXT, which is airing the first night of NXT TakeOver: Stand & Deliver opposite Dynamite. Also scheduled for Dynamite is Darby Allin defending the TNT Championship and Jon Moxley teaming with AEW World Tag Team Champions The Young Bucks against AEW World Champion Kenny Omega and The Good Brothers.

Since childhood, Tyson has been a wrestling fan, and Vince McMahon brought him into the business in 1998 to serve as a special guest enforcer for the WrestleMania 14 main event of Shawn Michaels vs. Steve Austin. Tyson would return to the promotion in 2010 as a guest host of Raw, where he would also team with our very own Chris Jericho against DX. He would turn on Jericho by revealing a DX shirt and knocking out Jericho so Michaels could get the victory. In 2012 WWE honored Tyson by having DX induct him into the WWE Hall of Fame celebrity wing. However, despite his previous affiliation with WWE, he is now All Elite.