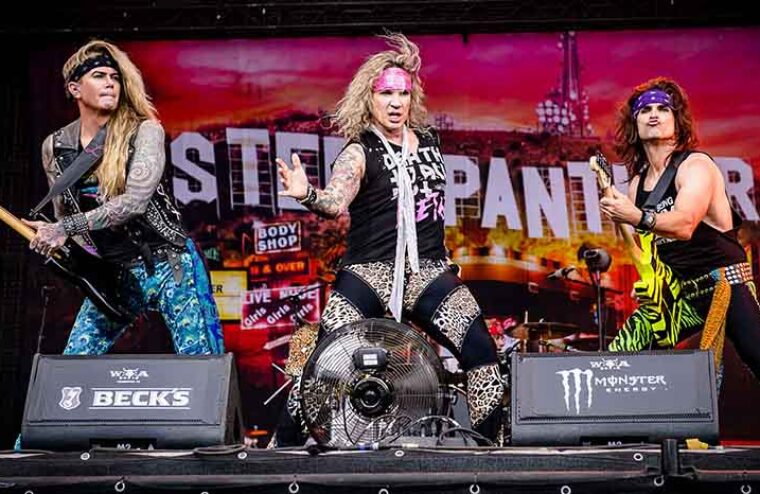 Steel Panther recently performed at Hellfest in France, and vocalist Michael Starr paid homage to Ozzy Osbourne when he dressed as “The Prince of Darkness” and bit the head off of a fake bat. High quality video of the show can be seen below.

Last year, Steel Panther parted ways with bassist Lexxi Foxx, and the band has since had numerous fill-in bassists for live shows. They’ve also received hundreds of video auditions, but they’re still struggling to find the right replacement. Recently, Starr and drummer Stix Zadinia (who was previously interviewed by WIJ), spoke with RAMzine about the future of the vacant position.

“We tried out over… We had how many video submissions… probably [over 700],” said Starr. “And we went through every single video. And we did some test runs with some people. And when we find the right guy, you guys will know.” Zadinia added: “On this tour, we have our friend Spyder with us, who is a great friend and an even better bass player. He’s not that great a friend. I’m kidding. He’s awesome. We’ve known him since 1990. He’s one of our homies and he’s killing it. And we cannot wait to jam with him. But we are still searching for the permanent guy ’cause Spyder’s got another gig; he’s got a paper route that he works on.” Starr said trying to replace Foxx “it’s like trying to replace Stix or me —  it’s impossible. So we may never, ever have a bass player. We might just be trying out bass players until I die.”

Last year, Foxx (real name: Travis Haley) told Rocking With Jam Man that he hadn’t spoken to his bandmates since the split.  “I still talk to the singer a little bit; I have in the past,” he said. “But I think that those scars and I think that the departure, the way that it went down, I think there’s some sore spots. But that’s tough for me to talk about. That was something that I’m very proud of — to be that character for such a long period of time, and to play with those cats,” he continued. “They’re all amazing musicians. And I just think that it is different to not have that [in my life] — I’d been in character for so long — but I have to say it’s a little refreshing as well.”

Guitarist Satchel told the “2020’d” podcast: “We didn’t want him to quit. Nobody wanted him to quit, including a lot of fans. I’m sure a lot of fans are very sad that he left. But he’s the guy who left the band. I think he’s got his own things he’s dealing with, and he just wanted to go and do that. So, I don’t know… I can’t answer for Lexxi Foxx. But we will all miss Lexxi Foxx, and we all wish him the best in everything that he does. But we didn’t fire him; he quit the band. So we’re gonna have to move on and get somebody else who’s younger and foxier and doesn’t need as much Botox.”