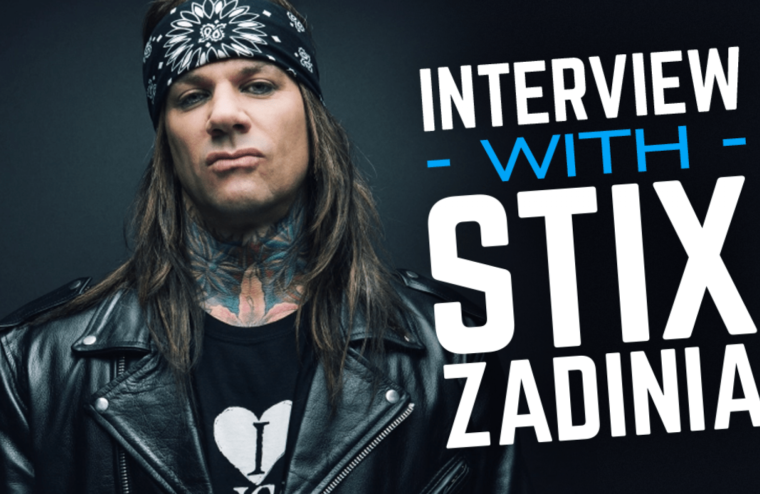 In the politically correct climate currently pervading nearly all walks of life, there’s enough “You can’t say that” and ‘You can’t do that” going around to last an eternity.

“California’s greatest export and renowned feminist supporters,” as the bio says, return with a fifth studio album, “Heavy Metal Rules” on Sept. 27. It’s a well-known fact that, yes, heavy metal does indeed rule, and Steel Panther is writing its own rules for how to play it, present it and perpetuate a brand that is steeped in tradition and delivered with modern and hilarious gusto.

“We’ve been grandfathered in,” Zadinia explained. “We’ve been saying this kind of shit for 25 fucking years.”

What shit has Steel Panther been saying exactly? You don’t have to read much past the song titles to find out. “All I Wanna Do Is Fuck (Myself Tonight),” “Always Gonna Be A Ho,” from the new record; Panther classics like “Gloryhole,” “You’re Beautiful When You Don’t Talk,” “Goin’ in the Backdoor” and “Asian Hooker,” among many others, are delivered with tongue-in-cheek charm, a wink, sometimes a backstage pass and all the subtlety of a brick shithouse.

Sure, it’s comedy rock. But it’s also really well-written and catchy, and the homage is so good that at this point it’s practically a worldwide phenomenon.

“What I mean by grandfathered in is we said it when it was not unacceptable to say, and we never veer from it,” the drummer continued. “It just may feel a little more sharp, because now you’re not ‘allowed’ to say, ‘Fuck everybody, everybody can suck my dick,’ without a bunch of people going, ‘Hey, you can’t say that.’ You know what? ‘Fuck you.’ ”

Zadinia calls it a “human condition.”

“Throughout my day, there are moments, and not all the time, but there are moments where I’m like, ‘Oh my God, fuck everybody,’ ” Zadinia said. “You get frustrated. We in Steel Panther have always been able to say what we want, how we want, and we have an OK to kind of be this place where people can go to just say what the fuck they want. As long as no one it getting hurt, I say, ‘Fucking say it.’ ”

The “Heavy Metal Rules” tour kicks off in early October, and Zadinia recently talked in depth about the new record and all things Steel Panther.

WIJ: We’ll get to the new record in a second, but first thing is first. Earlier this year, after he won The Masters, do you think Tiger Woods was cranking “Just Like Tiger Woods” at the celebration party?

Stix: “Bro, I fucking hope so. I know a couple of professional golfers that have said to me that they were gonna play the song for Tiger. I don’t know if it’s gone down, but I gotta imagine he’s heard it. I hope he’s heard it, and I hope he fucking blasted that shit.”

WIJ: So with “Heavy Metal Rules,” how did the writing and recording compare to some of your previous records?

Stix: “This one was a motherfucker to make. We had a lot of things in our way. Our singer had some surgeries — honestly some physical shit going on. We had to mellow out with that. (Bassist) Lexxi Foxx went into (sex) rehab, and we had to deal with that. We had a shit ton of stuff get in the way, but I feel like it’s our best record. I know bands say that, but I’ve never said that about one of our records. I feel like the shit that’s on this record is not wasteful or a bunch of filler. It’s all high-impact stuff.”

WIJ: This record seems just a hair more technical than previous ones. Is that off to say?

Stix: “I do not disagree with you. I think with this record there are more riffs. Drum-wise on the last record, there’s a few tunes where (as a drummer) you could kind of start the song and play it through it, and you didn’t really have to know the song that well. I don’t think there’s any songs on this record that you could just jam. You have to actually know the parts. I don’t think that was intentional, but I think you’re accurate, and I think it makes for a more interesting record. There’s so much crap out there right now, I feel like this is gonna be refreshing for people.”

WIJ: I want to get your thoughts on some of the tracks. Let’s start with the latest single, “Always Gonna Be A Ho.”

Stix: “It’s not dissimilar to ‘Community Property’ in the way it starts mellow and then goes into a big giant hook chorus. We’re fans of hooks. There’s a lot of bands that write intricate riff stuff. Like Dream Theater will write shit that’s impossible to play, but I cannot hum you a bar. The only thing I could hum you from them is ‘Pull Me Under,’ and that would be it. Other than that, there’s too many fucking notes. ‘Always Gonna Be A Ho’ is a heavy metal anthem. I don’t know what to say about it other than it’s hooky and memorable and powerful, and also when you get into the verses, it’s kind of pretty.”

WIJ: You guys usually start the record off with a scorcher, and “All I Wanna Do Is Fuck (Myself Tonight)” follows that sentiment.

Stix: “That one is interesting feel-wise. We originally didn’t have the drum opening. We were jamming it, and I had done that fill in preproduction when we went in to rehearse it for the record, but it was in the middle of the song. But I was like, ‘Dude, we don’t have any drum tops.’ So we were like, ‘How cool would it be to have drums open up the record and have that kind of swing beat.’ We take our album sequences very seriously. It’s a huge fucking debate of what song goes where. The flow of the record is very important to us. It has to be like a song the whole record. So you have an intro, and you come out of the gate, and the album has to have dynamics and breathe. You can’t put all your fucking fast songs at once. It’s like when you learn how to fuck girls properly the first time. When you fuck the first time, you’re just going. It’s like, go, go, go, go, go, and you finish, and that’s it. It’s like, ‘Wait, what just happened?’ But as you get older and you learn how to pace yourself, and then you go fast and then slow and then fast and then drive it home, that’s how we want our record to be. Like a killer sex session.”

WIJ: The title track is another anthemic offering.

Stix: “I love that song. It’s weird arrangement-wise. It’s not a pop song or even a typical heavy metal arrangement. It’s got the piano intro, and to me there’s some Sabbath-like influences in that. It’s real heavy and slow. I heard from a few people that it wasn’t what they expected. Because when you hear the title ‘Heavy Metal Rules,’ I think you imagine a Winger song or Def Leppard or Bon Jovi. To us, we don’t have any songs like this, and I feel like that chorus is an anthem. I can’t wait to see 90,000 people screaming ‘Heavy Metal Rules,’ because it totally does.”

WIJ: A Steel Panther live show is always a rock ’n’ roll party, but does anything happen in the live setting anymore that surprises you? Or have you pretty much seen it all?

Stix: “I’ve seen some things. There’s not a lot that actually surprises me, but there’s still stuff that makes me super stoked. The other day we were in Pennsylvania on one of our last shows, and this 20-year-old girl got up and jammed on bass with us. She did ‘Pussywhipped’ with us, and it wasn’t planned. She had a sign in the crowd, and she got up and wanted to play ‘Pussywhipped.’ We hadn’t played that song in a long time, but we ripped it out. It’s that kind of shit. Obviously, when you see titties on stage, it’s always fun. It doesn’t matter how many times you’ve fucking seen them, that’s always a fun thing to see. I don’t know that much surprises me as much as some things just really make me happy.”

WIJ: What have been some examples of the biggest displays of devotion from Steel Panther fans?
Stix: “Blow jobs. But also when people come to our shows dressed up like ’80s rockers, that never stops making me happy. They’re into the whole night, and they’re into the whole lifestyle. They’re in, and they’re having fun with it. And it’s not something they can wear to their jobs everyday. Steel Panther is this place that people can go to let their freak flag fly.”

WIJ: Aside from the tour, what does the next year look like for the band? Any new videos on the way or other projects?
Stix: “We’re gonna be touring our asses off, but in the meantime, we’re gonna be filming a bunch of Steel Panther TV stuff for our channel on YouTube. We’re working on a potential television series separate from that. We’re always writing new music, and I anticipate just creating content. Our band is a little different from most bands. Most bands put out a record, and that’s kind of the end of what they create content-wise. With our band, we’re very visual, and we interact with each other a whole shit-ton, and we have a lot of weapons in the arsenal in that we can put different types of content and media out and just entertain people. Because that’s what we want to do. We want to keep people entertained in a way that doesn’t get redundant and stays fun and fresh and relevant. We’ve taken the ’80s, and we’ve brought ‘em back, and they’re now relevant again, and we want to keep it that way.”

“Heavy Metal Rules” will be released on Sept. 27. For more information, visit steelpantherrocks.com.