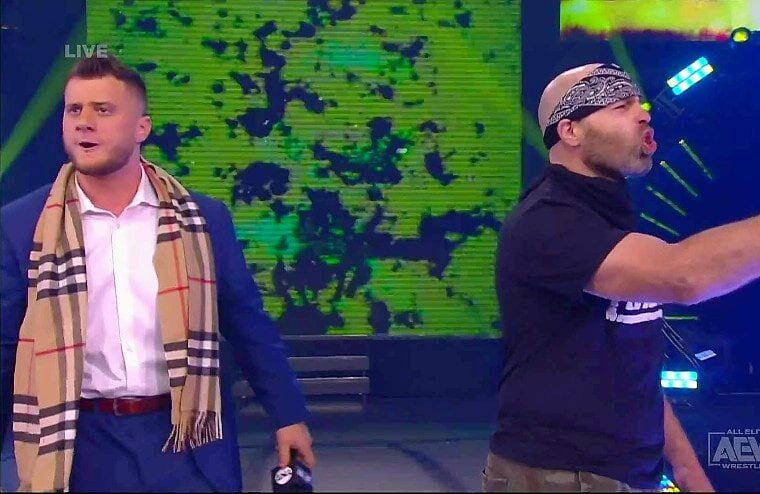 On the July 7th episode of AEW Dynamite, MJF told Chris Jericho he had to go through four opponents if he wants to wrestle him again, with each contest having a different stipulation. The first of what is being called the Labors of Jericho was announced to be Shawn Spears, with The Pinnacle member permitted to use a chair during that contest.

That match would take place during this week’s edition of Dynamite, and after a back-and-forth match, which saw interference from Tully Blanchard and Spears freely using multiple chairs, Jericho would be victorious. This led to an angry MJF who had been on commentary, announcing that Jericho’s second labor will come in the form of a No DQ match with Nick Gage at next week’s Fight For The Fallen special Dynamite. Additionally, Jericho can’t receive any help as Sammy Guevara had made the save earlier when Blanchard tried to get involved earlier.

Later in the show, Jericho would be interviewed and be in his Painmaker gear, revealing that he’ll be competing next week as his alter-ego. Jericho first came up with the character “The Painmaker” when he studied tapes of the legendary Bruiser Brody during the 30th anniversary of his tragic death. Brody was notorious for his wild and hardcore brawling style and inspired Jericho to debut this hard-hitting character when he worked with Kenny Omega in New Japan. The name “The Painmaker” then followed once he began working with Okada, who is known as “The Rainmaker.”

For those unaware, Jericho opponent Nick Gage is a deathmatch wrestling icon who was a subject on the latest series of Dark Side of the Ring. The documentary series would cover him almost bleeding to death in a match and the bank robbery he committed in 2010, which saw him steal $3,000 and go on the run with his girlfriend. He’d end up incarcerated after ended up turning himself in and was sentenced to five years. While he did receive early parole, he would be imprisoned again due to a drug-related parole violation.

Since his release, he has become a cult hero on the independents and made headlines when he cut David Arquette during a match in 2018. The former WCW was cut so severely that he would leave the venue midmatch and seek urgent medical attention. He currently wresters for Game Changer Wrestling and is working programs with both Jon Moxley and Matt Cardona. However, his career looks set to reach a new level next week when he wrestles Jericho on national television.