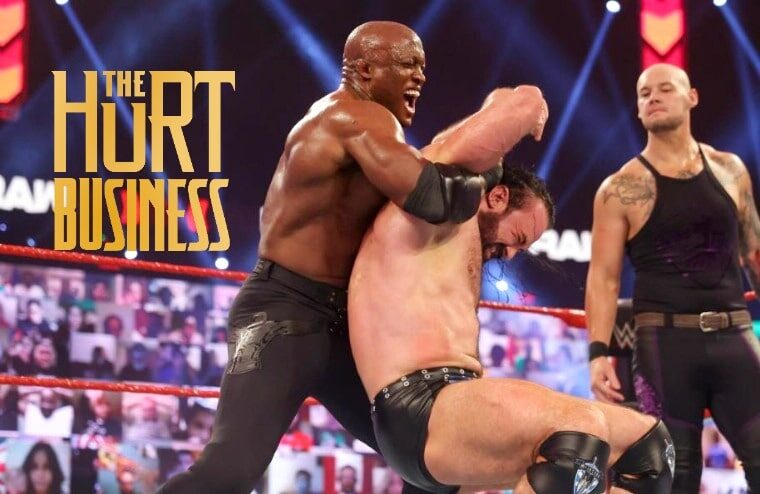 The Hurt Business has been one of WWE’s most dominant stables in many years. Between them, the members have held the WWE Championship, United States Championship, Raw Tag Team Championship, and 24/7 Championship. With Lashley headed to the WrestleMania main event, it looked like the group would play a crucial part in the show.

However, WWE seemingly no longer rates Cedric Alexander and Shelton Benjamin, as they had them drop their tag team titles to The New Day and then being overcome by Drew McIntee in two on one handicap match. These defeats resulted in them being attacked by Lashley and kicked out the group, leaving The Hurt Business’ future in doubt.

Later in the night, having defeated first Richochet and the Ali, Drew McIntyre would call out Lashley. Although instead of standing face to face with his WrestleMania opponent, he was attacked from behind by Baron Corbin and hit by a Deep Six. This allowed Lashley the opportunity to put him in the Hurt Lock while Corbin observed.

Once Raw had finished, many fans wondered if Corbin was now an official part of The Hurt Business or acting as a mercenary. Apparently, it was the latter because MVP has taken to Twitter and confirmed that Corbin is not a group member and the group is just Lashey and him. He did, though, tease future recruits by saying they are always looking for talented members.

We are always looking for talented applicants.

Have the day you deserve.MVP

We’ll need to wait and see if The Hurt Business does take in any recruits because, as was seen with Benjamin and Alexander, joining the group immediately elevates someone. Ultimately it looks like WWE still has big plans for the stable, and there won’t be a shortage of talents hoping to get involved for the extra television time and push.