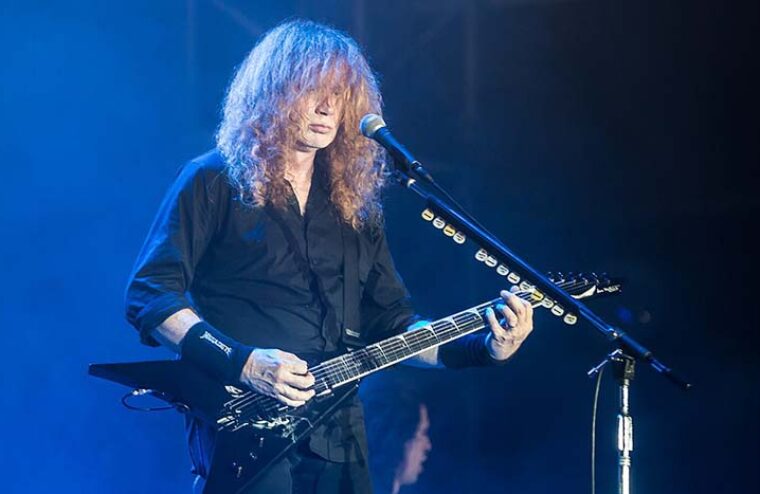 Megadeth has revealed the final details of their forthcoming album, “The Sick, The Dying… And The Dead!” The album will come out on Sept. 2 via UMe and feature 12 new tracks and two cover songs. It will be available on CD, vinyl, cassette as well as digitally. The band also plans to release a limited deluxe edition 2LP, 12-track album pressed on 180g black vinyl housed in a numbered gatefold jacket with a 12×24 lyrics/credits insert, a lenticular vinyl lithograph and a bonus seven-inch featuring “We’ll Be Back” and the unreleased B-side “The Conjuring (Live)”. The limited deluxe edition can only be purchased via MEGADETH’s official online store, through Sound Of Vinyl and uDiscover.

On Thursday, Megadeth released the first song from the album, “We’ll Be Back,” which was accompanied by the video, “We’ll Be Back: Chapter 1.” The video is an actioned pack short film that details the beginnings of Megadeth’s mascot, Vic Rattlehead. “For the first time in a long time, everything that we needed on this record is right in its place,” Dave Mustaine said in a release. “I can’t wait for the public to get hold of this!”

Mustaine said that there will be three videos for the album, and it also features guest appearances from Ice-T and Sammy Hagar. Bassist Steve DiGiorgio stepped in to record for the album and former Megadeth bassist James LoMenzo rejoined the band permanently. The band’s original bassist, David Ellefson, was fired from the group days after explicit messages and video surfaced on Twitter of his interaction with a 19-year-old fan. At the time, Ellefson released a statement on Instagram denying all social media chatter that he “groomed” an underage fan. He also filed a report with the police department in Scottsdale, Arizona alleging unlawful distribution of explicit images of him by unknown offenders.

In a new interview with Rolling Stone, Mustaine commented on firing Ellefson: “With everything that had taken place over the past, 10, 20 years with my relationship with our past bass player, it just became time to… it’s so uncomfortable for me to talk about. It was hard on me letting him go. And I’m happier now than I’ve ever been. It’s a different camp now, and I’m really happy. I feel totally invigorated. I feel like I’ve hit my stride, like my best years are ahead of me right now.”

Ellefson had previously opened up to Eddie Trunk about the circumstances of his dismissal: “I ran toward the bullets and dealt with it right away. The night [the messages and video were leaked online], a couple of people said, ‘Hey, don’t say anything.’ In particular, the Megadeth camp didn’t want me to say anything. But my legal [advisers] said, ‘Hey, I think you should say something. I think some people have done some really shitty things here and made some false allegations about you, and you have every right to defend yourself.’ And I did. Ultimately, that led to my dismissal from Megadeth. But I have every right, as anyone does, to defend yourself, especially when somebody is making false allegations about you like that. So I dealt with it that night, and quite honestly, that was it — it was over, and it was really kind of done. But then, as the Megadeth camp in particular jumped in and had addressed it — and not that they shouldn’t, but they did. That pretty quickly led to them making the decision to part ways with me and to move away from it. We had originally talked about doing a joint statement of sorts, and, of course, that was not what happened. So I was disappointed in probably the way it went down.”