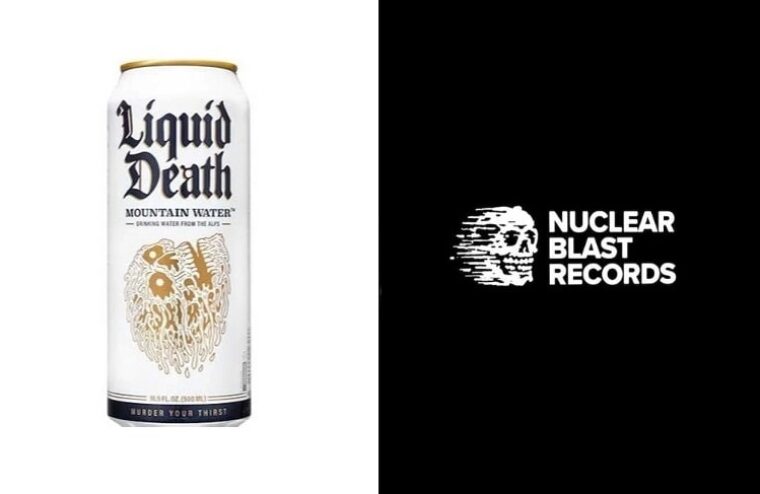 “We are honored that famous metal record label @nuclearblastrecords is so in love with Liquid Death and our mission of health and sustainability, that they recently decided to make their new logo a complete homage to our logo,” Cessario wrote. “Your records have been an inspiration to us for decades, so it’s a true honor to have inspired you right back,” wrote the water company in a social media post that had the hashtags #liquiddeath and #logo.”

Some readers of the post began to attack the similarities online which prompted a response from artist Justin Moll, who created the logo for Nuclear Blast. “Hey @liquiddeath, It stinks you assume I lifted your skull artwork. This is a real bummer for me. Just take a look at my art – I draw skulls and stuff. All sorts of skulls – nothing special or fancy about it. For this particular project I simply developed a blasted skull in a style I’ve been honing for several years. I do it for fun mostly. Cause it certainly isn’t about all the money I don’t make. You should know that no one asked me to draw something like yours. And that I did not use reference. I created it on my own, in my attic, with a pencil and paper. It was one of several options. The only thing I was thinking about while drawing blasted skulls was how cool it was to work with such a rad company. Sorry you think I copied your art – it’s not the case – I don’t even like water. And to everyone else who has ruined my day: F*ck you.”

Liquid Death responded, and while they apologized for the hassle towards Moll, they also still called out Nuclear Blast for going forward with such a similar logo. “We would like to clarify our logo comparison post from yesterday. @dr.wolfenbergen we were not at all taking a jab at you as an artist. Which is why we did not tag or mention you. You drew a cool skull that coincidently looks very similar to our official logo. Nothing wrong with that,” started the post. “But when a multi-million dollar global record label decides to use that art as their business logo, that’s a very different thing. Especially when we know for a fact that before the logo launched, employees at Nuclear Blast voiced to higher-ups that the skull was way too similar to our skull logo, and the NB execs decided to ignore the concern and do it anyway.”

Cessario continued: “Would have been so easy to have the artist tweak a new skull to be more unique. Any hate from our fans to the artist is totally misguided and wrong. Not at all his fault. And to be clear, we don’t tell people to do anything. The internet is crazy. And end of the day, we don’t really care about the NB skull logo. We didn’t call lawyers like many jerkoffs would, we simply called them out in a funny way. Because shame on them for being told this feels like a Liquid Death ripoff and them doing it anyway and essentially giving us the finger that our hard work to build our brand doesn’t matter. And the hard work of artist @willcarsola who spent hours making us our very unique identifiable skull logo to build our company around.”

“And @dr.wolfenbergen we f*cking love your work and would hire you any day to make art for us. We seriously apologize man for what you had to deal with. Again, your art is not the issue AT ALL. The wrong is what a big record label decided to do with it from a business standpoint.”

Cessario then shared a screenshot of a text message sent to Moll: “Hey Justin. This is Mike the founder of Liquid Death. Really sorry for this whole shit-uation and the idiots who berated you. When I posted the initial comparison it was intended to be a lighthearted jab. Shame on me for not fully thinking through all of the possible unintended consequences of a post like that.” He then offered to pay Moll to do an art piece for the bottom of the cases of Liquid Death.