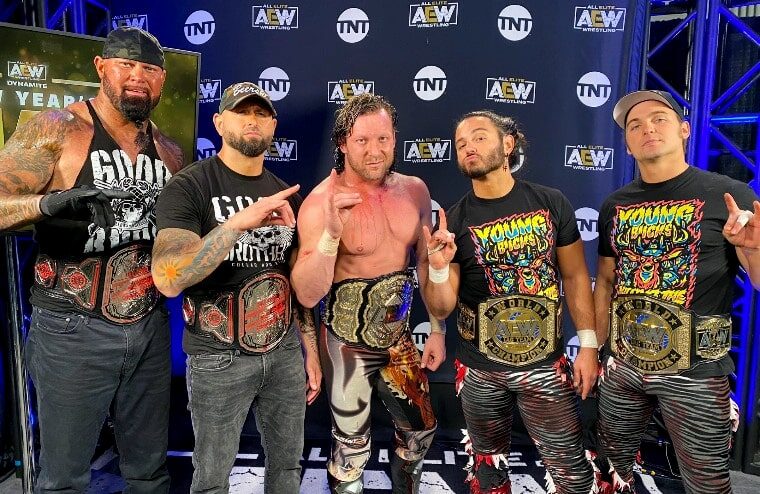 Following Kenny Omega’s victory over Rey Fénix, Jon Moxley came out with a barbed wire bat and attacked Omega. This lead to Impact Wrestling Tag Team Champions Luke Gallows and Karl Anderson making their AEW debuts and laying out Moxley. Brian Pillman Jr. and Griff Garrison, along with several other wrestlers, tried to make the save but were laid out. Finally, the Young Bucks ran out, but instead of going after Omega, Gallows, and Anderson, they would join them. The five former Bullet Club members ended Dynamite by making the Too Sweet hand gesture.

AEW and Impact are currently working together, with the interpromotional angle having kicked off on the December 2, 2020, Winter is Coming themed episode of Dynamite. On this episode, Impact’s Don Callis assisted Omega in defeating Moxley to become AEW World Heavyweight Champion. Omega has since made numerous appearances on Impact Wrestling on AXS and is scheduled to headline their Hard To kill pay-per-view on January 16, 2021. He will be teaming with Gallows and Anderson to face Impact Wrestling Champion Rich Swann, Alex Shelley, and Chris Sabin in a six-man match.

However, before that match occurs, Omega will be in action on New Year’s Smash Night 2 when he teams with the Young Bucks. Callis announced this after Dynamite, and Omega would tell fans that “We blew away everyone’s expectations, we warned you guys, the clues were there. Weren’t you listening? We’re just getting started.“