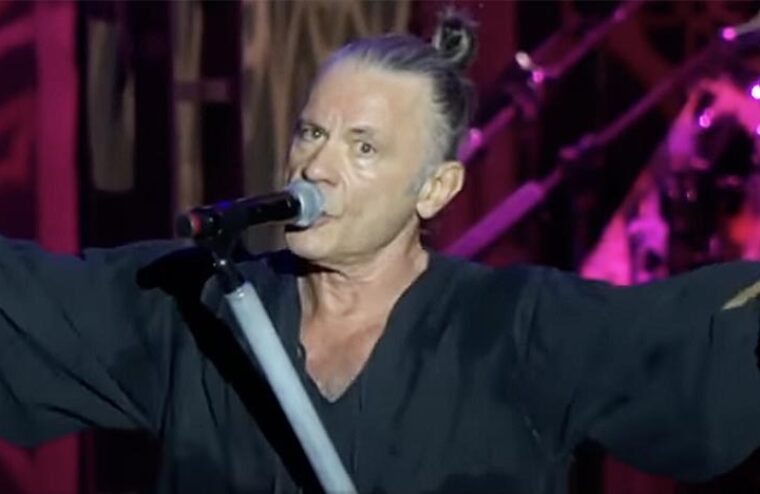 Iron Maiden is currently on the road for its 2022 leg of the “Legacy of the Beast” tour. Singer Bruce Dickinson previously explained that the trek will again focus primarily on a decades-spanning setlist of fan favorites. “The ‘Legacy Of The Beast’ tour, people have all paid their money to see the ‘Legacy Of The Beast’ show, with Spitfires and flamethrowers and Icarus and everything that goes with,” he said.

“So they’re gonna get all that. But the first three tracks are probably gonna be the first three tracks on the [‘Senjutsu’] album. ‘The Writing On The Wall’ they already know, so everybody should know the first three tracks. And I just think [the] ‘Senjutsu’ [title track] is just such a great opening song — so dramatic. And then once you’ve done that — and we’ll have a stage set to go with it — once you’ve done that, you’re back to the kind of ‘Legacy’ world at that point. But I think ‘The Writing On The Wall’ is gonna be a great song — I mean, a crowd singalong song. You can imagine that. It’ll be fantastic.”

On a recent episode of the “Psycho Schizo Espresso” podcast, Dickinson got to chatting about having relationships on the road with cohost and Oxford University psychologist Dr. Kevin Dutton.

“We toured with bands who were [involved with multiple partners on tour], and they’d look at us like we were just weird,” Dickinson said. “Yeah, obviously, we all had girlfriends, and sometimes you had girlfriends who were temporary girlfriends. [Laughs] But I don’t like it when there’s this undercurrent of abuse. It was [The Who’s] Pete Townshend, who knows a bit about abuse, I think, because he underwent quite a lot of it, and he said — and it clicked for me — he said, ‘The big moment is when you realize that you can manipulate people because of who you are.’ Because when you first start out, you don’t have any realization that people might want to sleep with you because you’re onstage. You think they want to sleep with you because they want to sleep with you, because it might be nice and because they like you. And often that’s true — it’s often that it’s true… And yes, there are some people that want you as a notch on the bedpost, just as some guys have that [same thing] with women, and, yeah, we’ve all been guilty of it, no doubt.”

“But there comes a point, which is incredibly corrupting and corrosive, in which you suddenly go, ‘Hang on a minute. You can actually kind of click your fingers and make things happen.’ And that’s a really scary moment, to realize that that power exists. And that’s why the Harvey Weinstein’s and all the rest of it, and the whole Hollywood thing… So that awareness of that, that’s when it becomes really corrupting. I mean, the guy… What’s his name? R. Kelly, who’s been indicted, been convicted, I think. It’s the same thing for actors as well… And then when you throw in a bucket of mood-altering drugs into the equation, then the wheels really come off the bus.”

Iron Maiden released its first album in six years, “Senjutsu,” in September of last year. It hit No. 3 on the Billboard 200 chart, charting higher than previous classics “Powerslave” and “The Number Of The Beast.”

It was Iron Maiden’s 13th album to appear in the Top 40 in the U.S. “By and large our audience has moved on with us,” Dickinson said. “Maiden’s audience is like a table made of plywood; every year you just add a new layer and the table gets bigger and bigger. We’ve grown organically — not through social media or any of that stuff. We’ve grown by going out and doing it in front of people.”