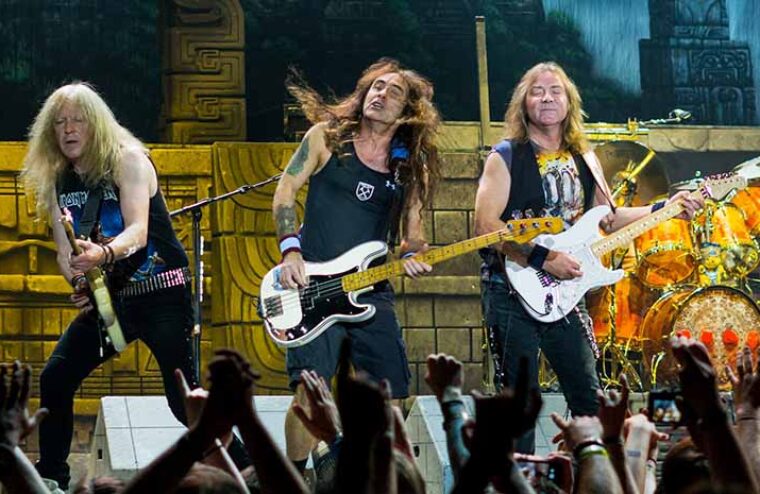 Iron Maiden kicked off the 2022 leg of its “Legacy of the Beast” tour on Sunday night in Croatia. Singer Bruce Dickinson explained that the trek will again focus primarily on a decades-spanning setlist of fan favorites. “The ‘Legacy Of The Beast’ tour, people have all paid their money to see the ‘Legacy Of The Beast’ show, with Spitfires and flamethrowers and Icarus and everything that goes with,” he said.

“So they’re gonna get all that. But the first three tracks are probably gonna be the first three tracks on the [‘Senjutsu’] album. ‘The Writing On The Wall’ they already know, so everybody should know the first three tracks. And I just think [the] ‘Senjutsu’ [title track] is just such a great opening song — so dramatic. And then once you’ve done that — and we’ll have a stage set to go with it — once you’ve done that, you’re back to the kind of ‘Legacy’ world at that point. But I think ‘The Writing On The Wall’ is gonna be a great song — I mean, a crowd singalong song. You can imagine that. It’ll be fantastic.”

Bassist Steve Harris also greeted a special guest in original Maiden vocalist Paul Di’Anno just prior to the show. Harris and Di’Anno had a friendly chat, and the band’s former singer stuck around for most of the show. Maiden recorded two metal classics with Di’Anno — their self-titled effort in 1980 and “Killers” in 1981. The meeting marked the first time the two came face to face in many years, and their interaction was caught on camera.

Di’Anno was fired by Maiden and replaced by Bruce Dickinson. Di’Anno previously said that exiting Maiden was the best thing that ever happened to him. “I absolutely have no regrets about leaving Maiden — I wasn’t right in the head at that time to be in the middle of all that,” he told The Jerusalem Post. “I was fed up and disillusioned; it would have been cheating the fans and myself if I had stayed. It was easy to walk away from, and I’m very happy the band got bigger and bigger.”

Di’Anno also previously spoke about the bands writing process early on. “Steve had most of the words and the lyrics [to the band’s first album] all written,” he said. “That was some of the bones of contention that we had in the band — that I didn’t get to write as much as I wanted to. ‘Cause I am actually quite a prolific writer, but a lot of my songs were not accepted. ‘Cause it’s Steve’s band, obviously. That first album was a revelation, I’ve gotta tell you. It was amazing. And the second album, for me, not so much. That’s when I started to lose interest a little bit. But [we] still [had] great times — really great times.”

Di’Anno also played his first concert in seven years on Saturday night. He has spent the last few months in Croatia receiving therapy for his knee in preparation for an upcoming surgery. Maiden opened their set with the live debuts of three songs — “Senjutsu,” “Stratego” and “The Writing On The Wall.” The band also played “Revelations,” “Blood Brothers,” “Sign Of The Cross,” “Flight Of Icarus,” “Fear Of The Dark,” “Hallowed Be Thy Name,” “The Number Of The Beast,” “Iron Maiden,” “The Trooper,” “The Clansman,” “Run To The Hills” and “Aces High.”