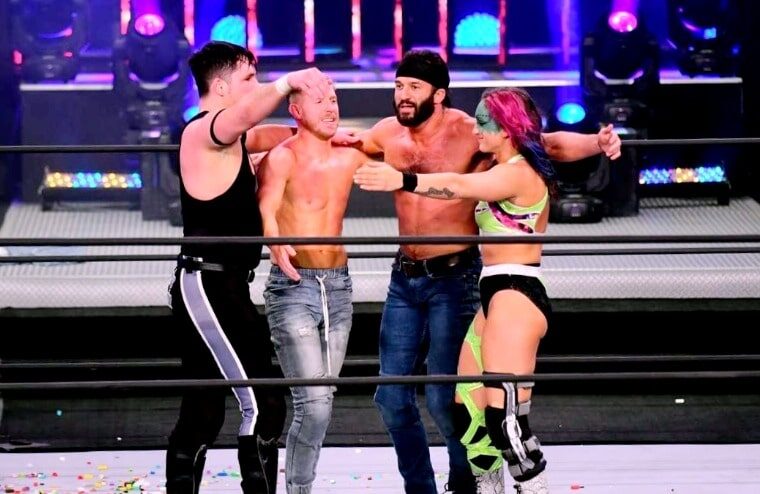 Last night, Dynamite’s main event was an Arcade Anarchy match between Chuck Taylor and Orange Cassidy against Miro and Kip Sabian, who Penelope Ford accompanied. The rules were falls count anywhere, and there were arcade machines around the ringside area. Taylor and Cassidy would be victories, seemingly blowing off the feud, however the big news was two injured AEW stars made their returns during the match.

First to return was Kris Statlander, who had been hiding inside a claw machine and putting Ford through an air hockey table with a fisherman buster. Statlander had been out of action since June 2020 after suffering a knee injury during a tag match following an attempt to dive on Kip Sabian, who was accompanying Penelope Ford. She landed on her knee and needed ACL surgery, so it made sense for her to get involved from a storyline perspective.

Then, during the match’s closing minutes, Trent returned in the back of his a minivan driven by his mom Sue. After getting involved in a brawl with Miro, he’d eventually putting him through a table, taking him out of the match. Since mid-December, Trent had been out with a partially torn pectoral muscle, which apparently happened during a 12-man tag match featuring the Inner Circle. Although on television, it was said to be from a backstage attack by Miro, Sabian, and Ford.

Following the match, Taylor, Cassidy, Trent, and Statlander celebrated together in the ring as Cassidy’s newly licensed theme song Where Is My Mind by Pixies played, and Sue gave them all the thumbs up. The belief is now with the feud concluded that Miro will now begin focusing on his singles career, with it known, his long-term aim in AEw is to become world champion.