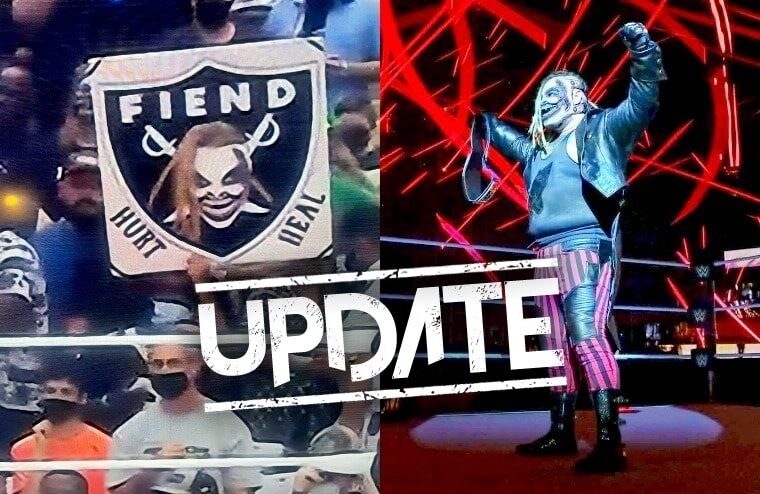 Fans who were watching the SummerSlam pre-show match between Big E vs. Baron Corbin would see a sign featuring The Fiend in a Las Vegas Raiders logo. It was a well-designed fan-made sign and received a lot of attention on social media. Bray Wyatt would even acknowledge it by retweeting a screenshot to his followers. However, the sign would soon disappear, and it was later confirmed that with The Fiend no longer being with the company, WWE had it confiscated.

Now the fan has commented on social media about the experience, first stating the sign took him a total of 30 hours to create, which certainly shows dedication. Additionally, he confirms that the sign was seized and that he was threatened with removal if he didn’t hand it over.

Took me about 30 hours to draw it with colored pencils. I hope it put a smile on your face and shows that your fans really appreciate you! You are the most creative wrestler ever and definitely one of the most talented!

I really appreciate all of your responses and support! Thank you all so much! In regards to the sign being taken away security, yes it was and I tried my best to not give it to them but I had no choice because they threatened to kick me out if I did not comply. They gave it back

WWE has a long history of removing signs. They like to control everything that appears on their television, even if fans basically become paying extras. Given that in the WWE Universe, Bray Wyatt nor The Fiend exists, management wouldn’t want any reference to the characters appearing. So the fact the sign made it to air for as long as it did was actually remarkable considering how strict WWE usually is with this type of behavior. Thankfully, though, the fan got his sign back after spending so much time and effort creating it.