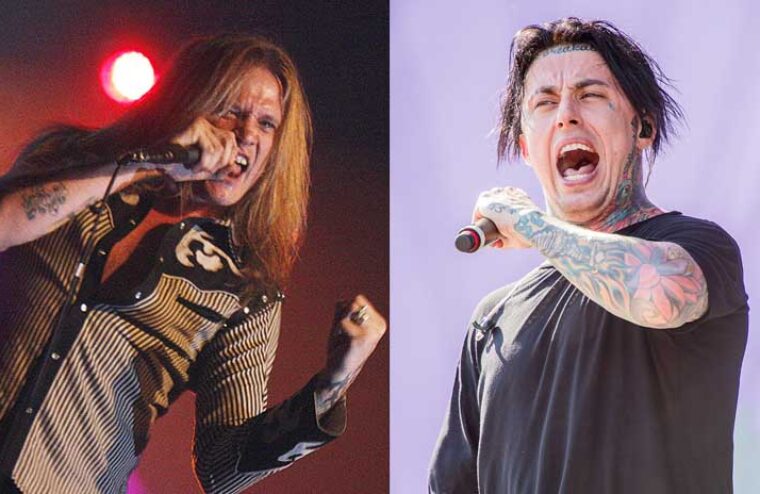 Earlier this year, Falling In Reverse were forced to pull out of a show when the band lost their laptops. Singer Ronnie Radke explained at the time: “As a band in 2022, you need your laptops. It’s like driving a car without an engine.”

This prompted a heated back and forth on social media between Radke, SiriusXM DJ Eddie Trunk and ex-Skid Row frontman Sebastian Bach. Essentially, Radke said the band needs their laptops for many of their rap beats and click tracks to keep the band in time.

Trunk said: “How much longer are fans, promoters, media, just going to accept the epidemic of live rock shows… not really being live?” he wrote.

Bach and Radke insulted one another for some time before the feud finally stopped. AEW star Saraya, who has dated Radke since 2018, told Chris Van Vliet of Bach: “He’s an as*hole, I was so disappointed … we didn’t realize how much Sebastian Bach was f*cking hated. This guy is a menace. He got into an argument with Chris Jericho at one point, like he is a menace.”

In a new interview with Detroit’s WRIF, Radke addressed the feud Bach.

“I stand my ground and I just stand by what I believe in,” Radke said. “[Sebastian] was so rude; he’s rude. Some prominent people in music DMed me. It made me feel a lot better. I don’t wanna call them out. But they were on my side. Even some famous wrestlers — some huge legendary wrestlers — hit me up too. And they were, like, ‘He’s always been an as*hole.’ I’m, like, ‘What do you mean?’ I didn’t know this. I had no idea. He was, like, ‘Yeah. Look.’ And he shows me his screen[shots]. I’m, like, ‘God, he’s so rude to a lot of people. Oh my God.”

“It started because I said I couldn’t play a show ’cause our laptops are like our engine, and I stand by that. Our biggest song is almost multiplatinum, and it was No. 1 on the radio, and 60 percent of the song is literally a rap beat. Am I supposed to, like… They don’t understand that; they just don’t get it. It’s not like Skid Row or Mötley Crüe. Even Mötley Crüe — Nikki Sixx came to my defense, man. I think that’s super cool. He defended me too.“

“For anybody that’s a dinosaur that doesn’t understand what I’m saying right now — that’s literally a dinosaur — every single band that you heard in the past 20 years has laptops. KISS — I mean, all these older bands have laptops.”

“We use laptops,” Radke continued. “I will not go on stage without a laptop. It has a click track to keep the time. It has rap beats that we cannot perform without. Our biggest song, fans will be very let down if we don’t play ‘Popular Monster’ or ‘Voices In My Head’. It’s just a new mix; it’s like a different way to operate. So it is — it’s like the engine. Without it, we can’t operate. We’re the part of the engine, and it helps. I mean, yeah, I can sing a cappella; it’s not gonna sound as good. I don’t know what they want from me. I think they’re just mad. I don’t know. They’re mad.”

Radke said his fans had his back when it came to Bach.

“I’m, like, ‘Bro, if you think I’m faking it, just go on YouTube and watch any video,” Radke said. “Tweet me a video where it looks like I’m faking it.’ And nobody can,” he said. “There’s no faking it. We’re not faking it. We need our rap beats. We need our synths. We could have, like, 25 people on stage, if that’s what makes Sebastian Bach happy. I’m sure nobody else would care. Six different fucking keyboard players. Let me get two more buses on tour, which will cost 250 thousand dollars, and their pay and hotels, just so Sebastian Bach is, like, ‘That’s real.'”

The Falling In Reverse singer also said that his lead vocals are always live when the band performs.

“I dare anybody to go try to find a video of me ever lip syncing,” he said. “From 2005 all the way to now, you’re not gonna find it. I refuse to lip sync. I’ll just cancel the show if my voice is gone or something. I would never do that.”