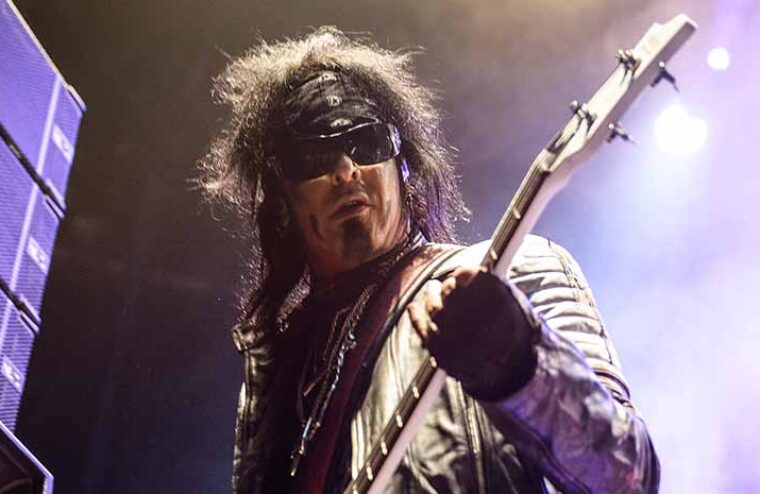 The 2022 leg of The Stadium Tour featuring Def Leppard, Mötley Crüe, Poison and Joan Jett & The Blackhearts wrapped up recently.  Mötley Crüe singer Vince Neil said the band will continue touring internationally with Def Leppard in 2023, through Mexico and South America in the spring and soccer stadiums in Europe next summer. Plans are for Mötley Crüe to return to the U.S. for more shows in 2024.

“We’re far from being over,” Neil told John Katsilometes of the Las Vegas Review-Journal in a recent interview. “When we come back in ’24, we’re going to do it all over again.”

After attending The Stadium Tour earlier this month in Las Vegas, veteran bassist Phil Soussan (Ozzy Osbourne, Last In Line) commented on the show via his social media.  “Went to see these guys yesterday at #allegiantstadium 2nd row center was pretty awesome! #poison were literally nothing but a good time – Bret and CC were terrific. #defleppard of course we’re spectacular and pristine! Motley sadly not so much…never seen a place empty out so fast after only a few songs.”

Sixx responded by writing “Thanks Phil” and adding a middle-finger emoji. Soussan addressed his remarks in a new interview with “Artists On Record Starring ADIKA Live!” “It was a great show. It was good. Where I was, the sound wasn’t that great. I was actually right in the front, but the sound was… either [because of] where I was sitting or [they had a] bad soundman. I said something about that inadvertently, without thinking, just really stupid, and I think I might have offended Nikki. So I wrote to him. I said, ‘Man, I’m really sorry. I didn’t mean to say anything.’ It wasn’t bad; it was just, like, [I was] hoping it was gonna be better [than it was].”

Soussan continued: “I’ve always tried to go through this world just trying to say something positive, bring something positive… You’ve gotta say something nice about things. And then sometimes you don’t think and you say something without thinking. And mea culpa; I have to own that stuff. My bad — totally my bad. It’s just one of those silly things. You say a thousand nice things and nobody remembers them; you say one bad thing and everyone still makes a comment [about it]… And thank God for, like, Blabbermouth. I open up my mouth and that’s some kind of newsworthy shit? Are you kidding me? Who are these people? Aggregate all this nasty stuff and just try to stir the pot.”

Soussan went on to say that he has “a lot of respect for the guys in Mötley Crüe. I’ve got a lot of history with them,” he explained. “I always wish them the best going forward. I hope they continue going forward and [continue] doing well. And like I said, if I offended anybody, I felt… The minute I saw that, I pulled it right down and wrote a letter of apology. I mean, that’s it. It’s, like, c’mon.”

Soussan also praised Sixx personally saying:  “He is a marketing genius. He’s a songwriter. He’s the guy who keeps that whole machine going. And again, mea culpa. And for me to say something unnecessary and careless, yeah — my bad.”