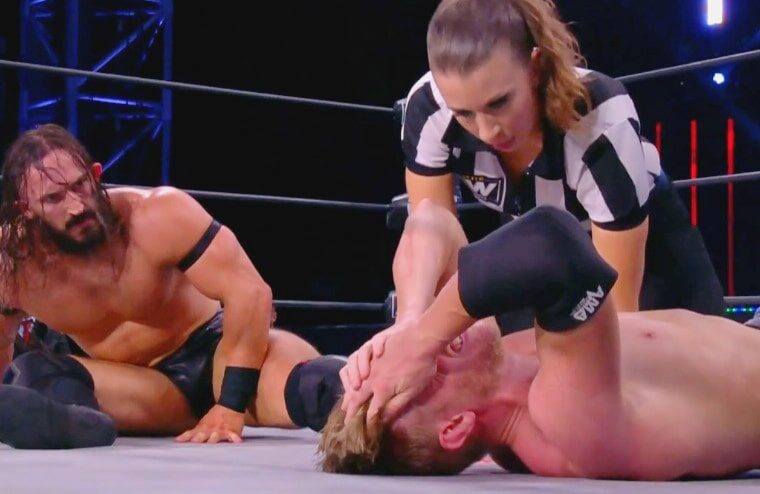 During last night’s episode of AEW Dynamite, the AEW World Title Eliminator match between Orange Cassidy and PAC was meant to go to a 20-minute draw. This was to set up a triple threat for the AEW Championship with Kenny Omega at Double or Nothing. The promotion got to that at the end, but everyone had to improvise after Cassidy got knocked loopy with several minutes left.

Cassidy received a stiff-looking kick followed by a Liger Bomb by PAC, and Cassidy rolled out the ring, clearly hurt. The match came to a halt while Cassidy was checked on, and when it resumed, Pac was trying to kill time, obviously to preserve the time limit draw finish. However, with significant time left, an audible was called, and Don Callis came out early and distracted Pac, allowing Omega to jump in the ring and layout PAC with the belt resulting in both me being counted out. Omega would then say he would have the night off at the pay-per-view as he had no opponent, but Tony Schiavone would announce a three-way.

Following the show, the big question everyone was asking was how Cassidy was doing. Thankfully, according to multiple reports, it’s understood he didn’t suffer a concussion and was socializing backstage. Obviously, he will be monitored ongoing before he competes again, and as of now, the triple threat match at Double or Nothing is still scheduled.