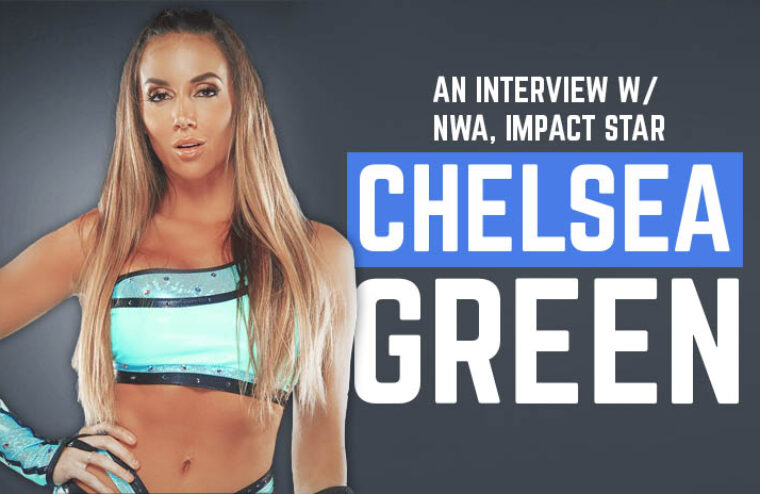 In professional wrestling’s heyday, territories ruled the roost. Talent worked in multiple parts of the country for different organizations and promoters showcasing their skills for new audiences and (hopefully) tallying good paydays along the way. While the modern landscape of wrestling is still quite a ways from the size and scope of the territory days, numerous independent promotions are thriving all over the globe, and renewed interest in the business has independent talent busier than ever.

One such talent is NWA and Impact Wrestling star, Chelsea Green. Fresh off recent dates for World Series Wrestling in Australia, Green squeezed in an interview for Web Is Jericho. The 31-year-old former student of Lance Storm’s Storm Wrestling Academy admitted that she’s wrestling more now than ever, and that includes the time she spent in WWE and NXT. “I’ve never been this busy in my eight-year career, and I think that’s kind of amazing and speaks to the times we’re in in wrestling right now,” Green said.

“I love that finally TV companies are allowing people to do this and be seen (in multiple places). We have done this on the independent scene for the last 10 years, but TV companies didn’t allow us to do that. I really think C*VID changed the game for wrestlers in terms of being allowed to pop up on different shows. I alone this month will be on TV in Australia, TV at Impact, TV at NWA and on multiple streaming services, as will a lot of other wrestlers. That is something that has just come about since the pandemic.”

Green watched wrestling as a kid, but didn’t truly fall in love with the business until she attended Storm’s wrestling school in Calgary. “That was the first time seeing a wrestling ring or ever locking up with somebody,” she said. “I didn’t know anything, but I knew the minute I had that first three, four hour training session, I was madly in love with it, and it was something I didn’t want to give up.”

As mentioned, Green wrestles for multiple promotions, but recently she’s made a big splash with NWA and Impact Wrestling. Green talked about her wrestling journey, her time with WWE and NXT, her venture into the NWA, working with her husband, Matt Cardona, and her other half’s massive toy collection in this WIJ exclusive.

What were the most important lessons you learned from Lance Storm? “Aside from absolutely everything I know? (laughs) Everything has come from him. Whether I realize it or not. From Day 1, he taught me basically everything, but he also taught me a lot of things that I didn’t actually learn until three or four years later. When I started working TV or touring, a lot of things he said back in 2014, it clicked. The main thing he teaches his students is respect. You can be a great wrestler, or you could be the sh*ttiest wrestler, but at the end of the day what matters is when people leave that ring, did they feel respected? Did they feel you treated them fairly and you gave them all you could give them? That’s really a big takeaway from the Storm Wrestling Academy.”

How did you hook up with the NWA? “I’ve always followed NWA. When I first went to Japan and met Santana Garrett, I believe at that time she was the NWA champion, or she had just been the NWA champion. So it was always kind of on my radar, but I never got to go there before WWE. One thing that was on my to-do list when I was released from WWE, was that I wanted to go to Ring of Honor and I wanted to go to the NWA. So the first two calls I made besides calling Scott D’Amore at Impact Wrestling, were to Billy Corgan and Pat Kenney at NWA, and Bobby Cruise and Maria Kanellis at Ring of Honor. So, I literally called them 10 minutes after I got off the phone with (former WWE executive) John Laurinaitis after being released.”

You currently have The Cardona Family angle at NWA and Impact with your husband, Matt. What’s it like doing angles with your significant other? “Oh my god, it’s hard (laughs). I think people see the glitz and the glam of working with your best friends or working with your partner. What they don’t see is the fact that no matter who you are paired with, you are not the same person. You were brought up in the wrestling industry different. You were trained different. You are two or three or four totally different people, and to make that work and mesh and then put on a show as if you are one, is really, really hard. Deonna (Purrazzo) and I have a dIfficult time doing it, but we are also much more alike than even Matt and I are. We are male and female. He’s been a fan since birth. I am a new fan. I was trained somewhat recently. He was trained 20 years ago. He was at WWE for 15 years. I was at WWE for a second. All those things make us complete opposites, but we learned slowly but surely — and we’re still working on it — we learned to present ourselves as a unit and find common ground when we go through that curtain.”

What was your time like in WWE? And what did you learn most from the experience? “I have two different experiences. I have an experience with NXT, and I have an experience with WWE. I had an amazing, amazing time at WWE. I was heard, or I felt heard, at least. I had meetings with Vince. I had meetings with Johnny Ace, I had meetings with Bruce (Prichard). I was heard and I enjoyed my time there. I had a really, really tough time at NXT. I didn’t necessarily feel as heard, although I had a great relationship with Triple H. I loved being able to go to him and express myself to him and what I wanted to do, but the Performance Center is a really difficult place, and it breeds insecurity in people. That’s not necessarily the most healthy kind of environment to be in. If I could go back now, a lot of things have changed, and I’m much more sure of myself now and sure of what I bring to the table. I really like a lot of the girls that are there and on TV right now. I think they have a solid group of women. But they were two very different experiences, and I was almost relieved to be able to be called up to the main roster and work with a new group of women and work with people I trusted. It’s very hard in developmental to be putting on 10 to 20 minutes matches with people who are new. That’s why I had my arm broken, unfortunately. I was working with someone who was very new. And you kind of have to watch out for yourself, watch out for them and watch out for every other thing. That’s a tough position to be put in, but it’s one I grew from.”

In the past few years, it seems like the turnover in NXT and WWE has been especially high. As someone who worked for both, what’s your take? “Well I don’t think a high rate of turnover is bad. What was a little bit bad was the fact that they didn’t have turnover for a long time. If you remember, four plus years ago, this is what they did. Every year, they had Wrestlemania, and then they had new releases and they brought in fresh faces. I don’t think that’s bad. I think that’s what makes WWE, WWE. We bring in new people, we train them. We make them superstars. They might be people you’ve seen on the independent scene, or they might be people you’ve seen in the entertainment world or the professional sports world. I don’t think that’s bad. I do think what’s unfortunate is they released a lot of people that had unbelievable potential. They hired a lot of people, and hired a lot of people before (those who were released) could show what they could do. So that was unfortunate. But the rate of turnover, I mean, you’re going to continue to see people released and go and thrive for other companies and on the independent scene, and you’ll see people hired that thrive in WWE. That’s just the nature of the game.”

Switching gears here, Matt told us a little about his toy collection when he spoke to Web Is Jericho, but what is the craziest toy purchase you’ve seen him make? “Oh my god. There’s a Tugboat that he bought that was ridiculous. There’s a moon belly Kamala that he bought that was ridiculous. If I spent this time talking to you about all the ridiculous sh*t we have at our house, I could go on for a day. But I say this a lot — it could be worse. I don’t even want to think about the sh*t he could collect (laughs). So toys? It’s not so bad.”

What are your long-term goals for wrestling and beyond? “I’ve been spending a lot of time thinking about that lately. I’m a woman. I’m 31 years old. I do want a family. But it’s so hard, because right now I feel like my career is kind of making a resurgence. Who’s to say what’s gonna happen? I never want to take going back to WWE off the table. I never want to take winning the Knockouts Championship in Impact or the tag titles off the table. But aside from winning some titles and possibly heading back to WWE at some point, I think my goal in the long run is to transition slowly out of wrestling and into a different side of the entertainment industry, whether that’s hosting or acting or getting back into stunt work, but I haven’t totally decided that. I always like to say these things but leave the door open for whatever opportunity may come my way. Because when you plan things, nothing seems to go right (laughs). That’s one thing I’ve learned in wrestling. Set goals, but don’t plan. Because if things come along the way you didn’t plan, like going to Lucha Underground or becoming the Knockouts Champion, those are the amazing things and those are the things you kind of have to stop and think, ‘Oh man, my life is great. And I didn’t expect this, but it’s amazing.’ So I’m gonna leave the door open for whatever comes my way.”