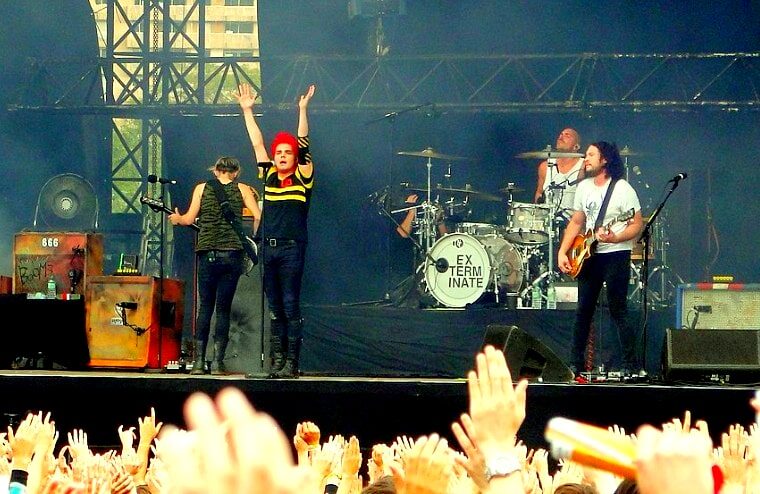 My Chemical Romance split in 2013, and there wasn’t much news about a potential reunion for a few years. In 2014, the band released a new song, “Fake Your Death,” as part of a greatest hits compilation. In 2016, a reunion was speculated when the group posted a video on social media that turned out to be for a 10th anniversary reissue of the band’s 2006 album “The Black Parade”. The band said at the time, “We are not touring and there is no reunion planned.”

The group’s first concert together since their split wouldn’t come until 2019, and a planned tour was postponed several times. That trek will finally get underway next week in Europe before coming to North America, New Zealand and Australia. On Friday, My Chemical Romance surprised fans with the release of a new song, “The Foundations Of Decay.” “See the man who stands upon the hill,” frontman Gerard Way sings. “He dreams of all the battles won. But fate had left scars upon his face, with all the damage they have done.”

My Chemical Romance’s last full-length studio album was released in 2010. “Danger Days: The True Lives of the Fabulous Killjoys,” debuted at the top of the Billboard Rock Albums and Alternative Albums chart, and came in at No. 8 on the Billboard 200.

Reactions to “The Foundations Of Decay” have been positive as evidenced on Twitter. Influencer Nik Nocturnal remarked: “My Chemical Romance just released a new song and it has a breakdown… Emo is NOT dead.” Comedian Daniel Howell wrote: “help my fringe .. it’s drooping over my eyes .. my hand .. is uncontrollably reaching for eyeliner .. why. dear god there is a new my chemical romance song.”

Alternative Press Magazine posted: “My Chemical Romance just dropped their first song since 2014, please check in on your emo friends. They are not okay.”