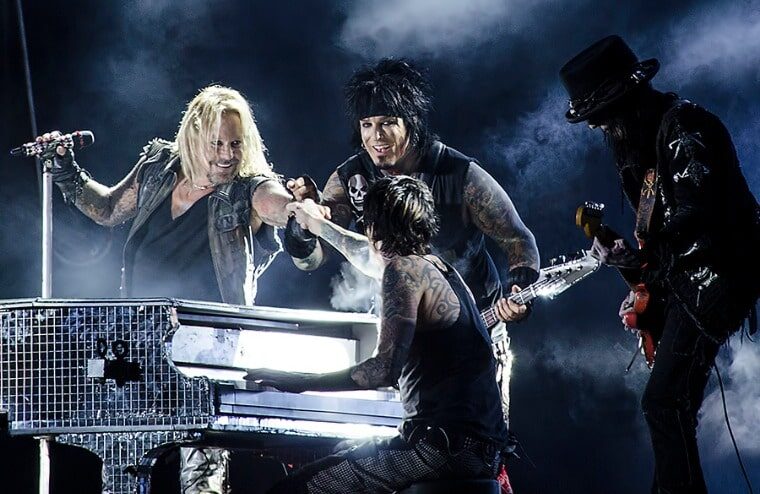 On Friday 15th October, Vince Neil and his band performed to a raucous crowd at the Monster on the Mountain festival in Pigeon Forge, Tennessee. While things were initially going well, the Mötley Crüe singer accidentally stepped off the stage and would plunge 4 feet onto the concrete floor. Neil would quickly receive assistance from his roadie and security, but despite wanting to continue, he was taken to hospital for treatment, with guitarist Jeff Blando handling lead vocals for the rest of the performance.

Now, fellow Mötley Crüe member Nikki Sixx has updated fans on his bandmate’s condition during an interview, saying Neil is on the mend after breaking his ribs. However, he did state it could have been worse had Neil not landed on his guitar. Additionally, he would place the blame for the accident on the crew for not putting reflective tape on the stage.

Without that, it’s all completely black, so you can walk forward thinking there’s still stage there and fall off, I’ve done that myself; Vince and I were laughing about one time we both fell off the stage at the same show. But he was really lucky; He said if it wasn’t a song that he was playing rhythm guitar on it could’ve been his head, which would’ve been a worse injury. The guitar broke his fall. But he’ll heal up and we’ll be ready to go on tour in June.

Mötley Crüe last performed in Los Angeles on December 31, 2015, and at the time, it was promoted as their final show. However, money talks and with renewed interest in the band and due to the Netflix biopic The Dirt based on the book of the same name, all four members agreed to reunite. While the tour was initially scheduled to commence in the Summer of 2020, worldwide events prohibited that, with the new kickoff now planned for June 2022 giving Neil plenty of time to recover.