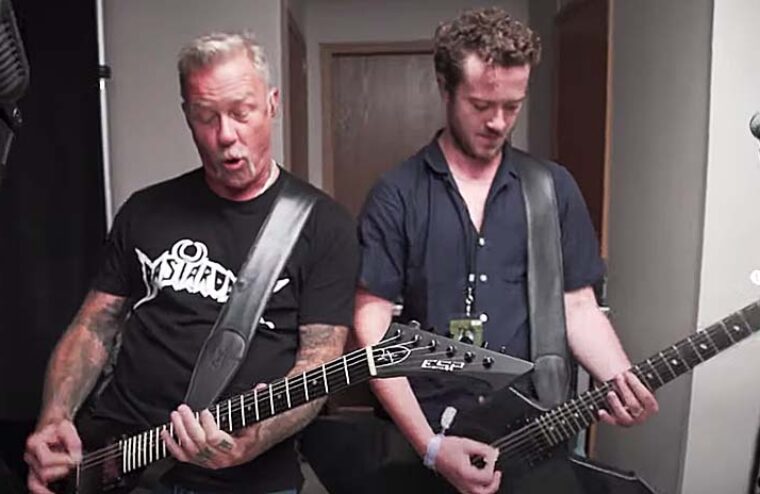 Metallica previously responded to having their legendary tune “Master Of Puppets” included in the Netflix hit show, “Stranger Things.” The character of Eddie Munson (played by Joseph Quinn) performs what he calls “the most metal concert ever” in the dark, alternate universe of the show as he tries to help his friends vanquish the show’s penultimate villain, Vecna.

“The way The Duffer Brothers have incorporated music into ‘Stranger Things’ has always been next level, so we were beyond psyched for them to not only include ‘Master Of Puppets’ in the show but to have such a pivotal scene built around it,” Metallica said in a statement. “We were all stoked to see the final result and when we did we were totally blown away… it’s so extremely well done, so much so, that some folks were able to guess the song just by seeing a few seconds of Joseph Quinn’s hands in the trailer!! How crazy cool is that? It’s an incredible honor to be such a big part of Eddie’s journey and to once again be keeping company with all of the other amazing artists featured in the show.”

Last week, Metallica met and jammed with Quinn at a rehearsal for their headlining gig at Lollapalooza in Chicago. During the hang, Metallica gifted Quinn with a custom, signed B.C. Rich guitar similar to the one he played on the show. Metallica frontman James Hetfield said in a video (which can be viewed below) that he’s enjoyed “Stranger Things” since its inception. “My kids and I, it’s been a bonding experience for us,” Hetfield said. Quinn said he constantly listened to the song for the past two years, and that he felt “very connected” to the band. “Thank you so much for letting us use the track,” Quinn said. “Thanks for doing it justice,” Hetfield replied.

After talking, Metallica bassist Robert Trujillo invited Quinn to jam on the tune. Quinn said, “I’m a bit rusty, so I might need a lesson.” Quinn also said after, “It was amazing! Opportunities to play ‘Master Of Puppets’ with the most iconic metal band of all time don’t come around very often. A story for the grandkids.” Metallica had also previously shared a TikTok video where the four members of the group play along with Munson in the scene. On the left side of the minute-long, split-screen video, Metallica mime to the track in their rehearsal space while on the right side, footage plays from the “Stranger Things” scene. “Eddie… this is for you!” reads the caption on Metallica’s video. The band also sport shirts of the Hellfire Club, the Dungeons & Dragons group led by Munson in the show. As a result of the inclusion in the show, “Master Of Puppets” shot up on Spotify’s Top 50 Global chart.