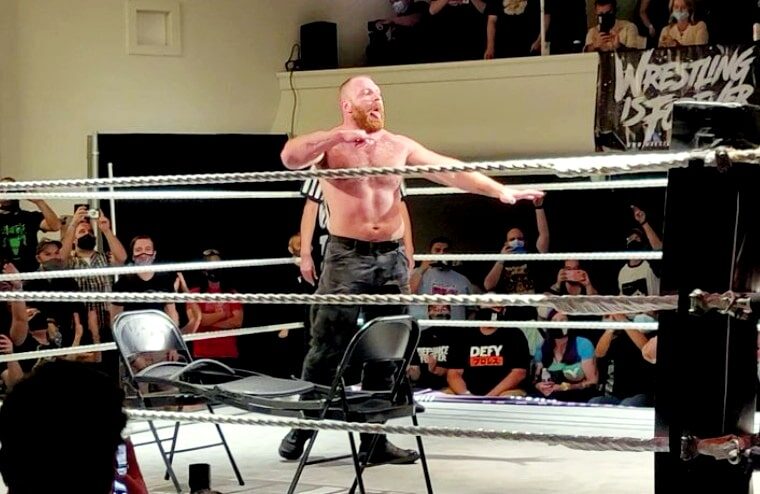 Last Wednesday, Jon Moxley and Eddie Kingston wrestled Minoru Suzuki and Lance Archer in a Lights Out match that aired on Friday’s episode of Rampage. While Moxley was set to have a weekend off to recover, Kingston was booked to make his debut for Seattle-based Defy Wrestling on Saturday night. However, with Kingston being unable to compete, his tag partner would fill in for him, wrestling Schaff, who calls himself the “The Baddest Motherf*cker In Professional Wrestling” in what appears to have been a hardcore match.

With Moxley’s appearance not announced or reported beforehand, fans would be stunned to see the former AEW and WWE Champion come through the curtain. You can see this by their reaction in the below footage uploaded to Twitter by @TheeBrianJ.

Moxley and Schaff brawled all over the building, and the AEW star would be victorious after dropping Schaff onto thumbtacks and hitting a Paradigm Shift DDT for the victory. You can see this below, thanks to @JoeyJohnela‘s video.

Following the match, it was announced that Moxley would be returning to the Defy Wrestling promotion for their November 20th showing facing Tom Lawlor. AEW’s contracts allow talents to wrestle on independent shows subject to approval from Tony Khan, and Moxley, who came from the indies, is making the most of this. He recently won the Game Changer Wrestling Championship after defeating Matt Cardona at their The Art Of War Games pay-per-view and is scheduled to face Nick Gage on October 8th

Regarding Eddie Kingston, not much is known about his current injury status. Although both he and Moxley are still advertised for an upcoming rematch with Suzuki and Archer in a Philly Streetfight for NJPW Strong on October 17th, so hopefully, this indicates he won’t be out for long.