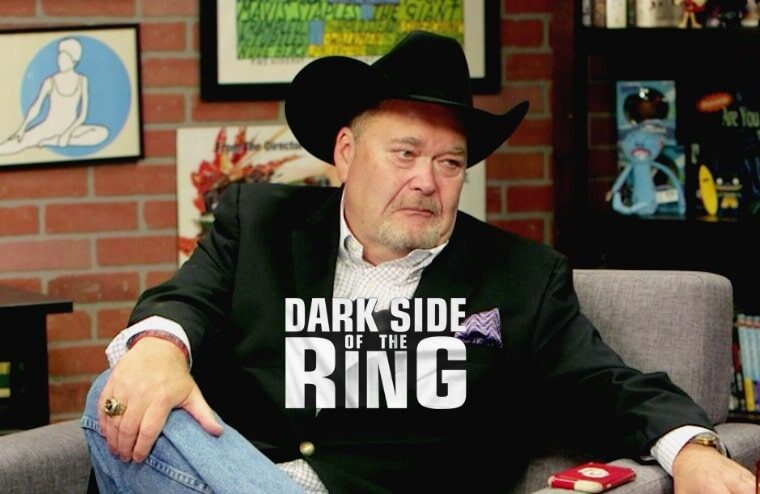 The third season of Dark Side of the Ring is coming later this year, narrated by our own Chris Jericho. More episodes than ever are planned, but so far, only three subjects have been officially revealed or at least heavily implied. They will be about Brian Pillman, the Collision In Korea event, and Nick Gage. However, based on interviews giving away details, it’s known that they’ll be episodes on Chris Kanyon, Grizzly Smith and his family, Frontier Martial-Arts Wrestling, Xtreme Pro Wrestling, Bruiser Bedlam, and The Dynamite Kid.

Now during a recent episode of his Grilling JR podcast, Jim Ross, who has appeared on Dark Side of the Ring previously as an interviewee, has revealed another topic. The current AEW commentator would tell his listeners that he’d spoken in detail about the infamous “plane ride from hell” which took place in 2002.

Yesterday, I spent four hours with the Dark of the Ring guys here in my home in Florida and talked about the plane ride from hell. I told them in the beginning, I said, “I don’t like this topic, I don’t like remembering this bullsh*t.” It was a bad day at the office, it was one of the more darker days during my tenure as head of talent relations, but it’s going to make a hell of a special for Dark Side of the Ring that was spawned by what they heard Conrad and I talking about on this podcast.Jim Ross

The story is legendary within wrestling and occurred when a 747 full of WWE talent returning from the UK-exclusive pay-per-view Insurrection got very unruly. Vince McMahon had the whole crew on board and in an act of generously provided talent with an open bar for the seven-hour flight back to the US.

This led to an amateur wrestling match between Curt Hennig and Brock Lesnar, Ric Flair undressing, Dustin Rhodes singing on the PA system, and Scott Hall making crude remarks to the flight crew. However, Michael Hayes, the most infamous passenger, almost urinated on Linda McMahon, got physical with JBL, and received an unplanned haircut thanks to Sean Waltman. The aftermath saw two flight attendants file a lawsuit, Hennig and Hall were released, and Hayes’ ponytail ended up pinned to the wall at the next TV taping.

No air dates for any upcoming episodes have yet been confirmed, and the series is still being filmed. Although it is known season 3 will premiere with the Brian Pillman episode and includes an interview with Steve Austin. This was quite a coup by the show’s producers as talents affiliated with WWE do not usually participate.