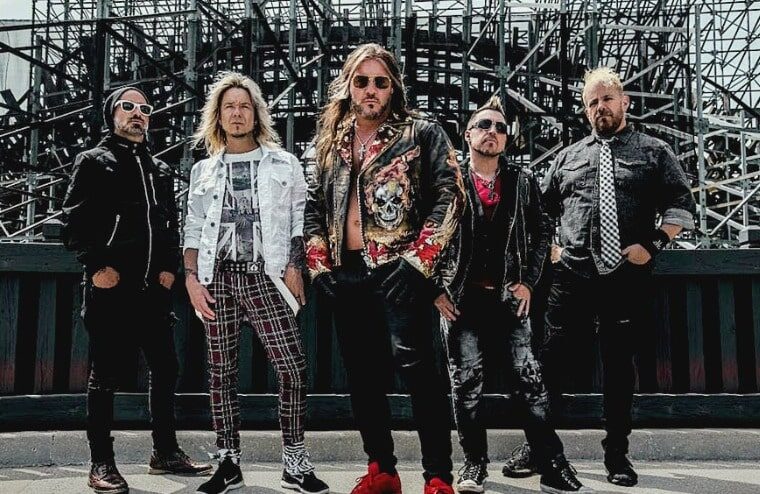 FOZZY released their new album “Boombox” on May 6 via Sony, and the band has been busy on the road with their “Save The World” tour. “2022 has already been the biggest and best year in FOZZY’s career,” said singer Chris Jericho. “From ‘Judas’ going gold with 500,000 units sold, to ‘I Still Burn’ being the fastest charting song in Fozztory, to the ‘Save The World’ tour being our most successful run ever, we decided to extend the celebration and do another HUGE run through North America starting in September! So come celebrate ‘Boombox’ (which critics are calling our best album ever),the power of rock ‘n’ roll and the magic of FOZZY LIVE with us again this fall! And bring your party hats…you’re gonna need em!”

“Boombox” is FOZZY’s eighth full-length studio album and the follow-up to the band’s mainstream breakthrough, 2017’s “Judas.” The band has released four singles for the album, “I Still Burn,” “Nowhere To Run,” “Sane” and “Purifier.” Web Is Jericho reviewed the album in March.

Jericho also recently explained the new album’s title and said the band was looking for a more upbeat moniker. “I love the concept of ‘Boombox’. The reason why we called it that is ’cause the last few records — ‘Sin And Bones’, ‘Do You Wanna Start A War’, ‘Judas’ — they’re very dark titles, and when you come see us live, it’s a very fun, upbeat show. And we wanted an album title that kind of brought that vibe. And boombox, if you had one, if you are old enough to have one, it was just a cool… That’s how you used to listen to music back in the day; you put the cassette into the boombox and press play and it brings back a good time. If you don’t know what a boombox is, you’ll find out about it very quickly [when] you see the imagery. And it’s kind of what FOZZY is as a band — we play songs that make you smile and put on shows that kind of bring on the same vibe like a boombox would’ve. Plus no one’s ever called a record that before. So we just thought it really fits us and it’s original and it’s unique. The imagery is very cool. And everything kind of fell into place.”