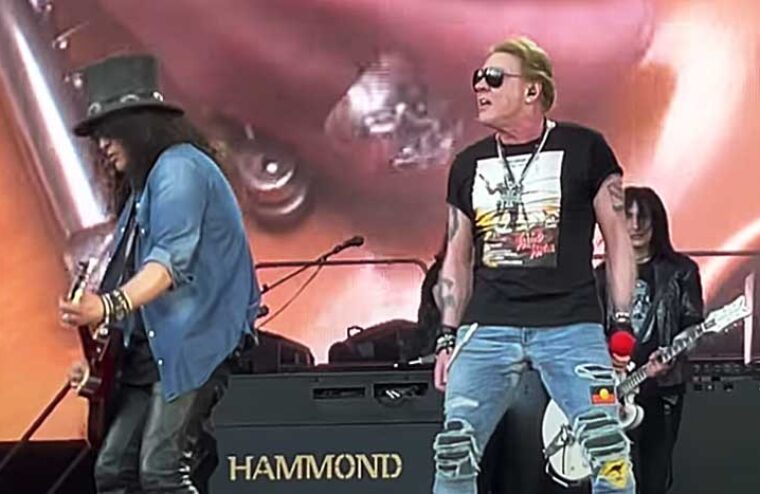 City News Service reports that legendary rockers Guns N’ Roses have sued an online gun store named Texas Guns And Roses, alleging that the store’s name is “confusingly similar” to their own.

The lawsuit alleges that Jersey Village Florist operates the online store, texasgunsandroses.com that “primarily sells firearms and firearm accessories, such as ammunition, scopes, body armor, suppressors, and metal safes, and also sells clothing and backpacks” with out the band’s “license or consent.”

Lawyers for Guns N’ Roses further allege that Jersey Village Florist purports to sell roses and other flowers as “a contrivance to purportedly justify” the store’s “wholesale appropriation of the Guns N’ Roses mark. Notably, [Jersey Village Florist] has not sought registration of any of Defendant’s Marks for any goods or services related to flowers, and Defendant does not prominently market flowers for sale on its Website.”

An attorney representing Jersey Village Florist says they will fight the lawsuit in court. “This is an attempt to run up costs and burn us out,” said their lawyer. “Our client sells metal safes for guns and flowers, and have a one-stop website and absolutely no one is confused. Nobody thinks we’re the band or there is some affiliation. We will be fighting back.”

Guns N’ Roses’ suit seeks unspecified damages and a court order prohibiting the use of the web site name.

Earlier this week, an Australian woman claimed she was hit in the face by Axl Rose’s microphone when he tossed it into the crowd during Guns N’ Roses’ concert in Adelaide.

Rose since responded: “It’s come to my attention that a fan may have been hurt at r show in Adelaide Australia possibly being hit by the microphone at the end of the show when I traditionally toss the mic to the fans,” he wrote. “If true obviously we don’t want anyone getting hurt or to somehow in anyway hurt anyone at any of r shows anywhere.”

“Having tossed the mic at the end of r show for over 30 years we always felt it was a known part of the very end of r performance that fans wanted and were aware of to have an opportunity to catch the mic. Regardless in the interest of public safety from now on we’ll refrain from tossing the mic or anything to the fans during or at r performances.”

“Unfortunately there r those that for their own reasons chose to frame their reporting regarding this subject in a more negative n’ irresponsible out of nowhere light which couldn’t b farther from reality. We hope the public and of course r fans get that sometimes happens.”

“A BIG THANKS to everyone for understanding.”