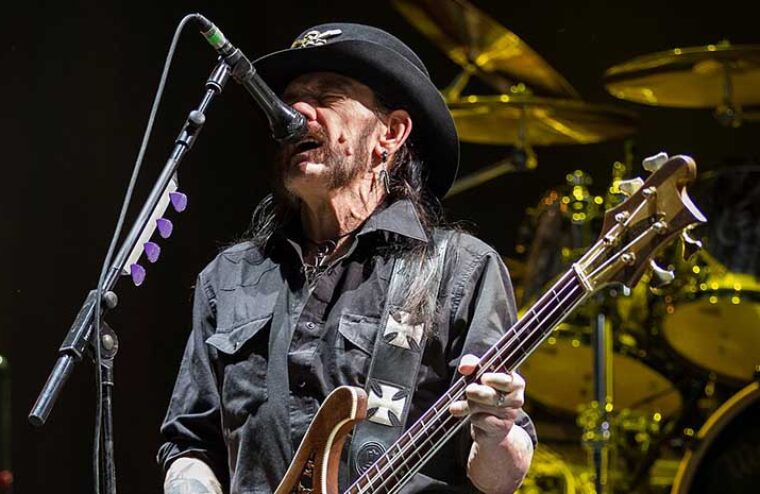 Late, legendary Motörhead frontman Lemmy Kilmister was no stranger to France, and one of his favorite festivals to perform at was the annual Hellfest in Clisson. Motörhead played the first ever incarnation of the event and became a Hellfest staple. A statue of Lemmy was erected six years ago at Hellfest, but the plaster it was made of began to crumble. French sculptor Caroline Brisset was approached by event organizer Ben Barbaud late last year and jumped on board to create an absolutely massive new steel and concrete statute of the late Motörhead legend.

“I said yes because it was a great project,” she told Ouest-France. “And it was also quite a challenge to make such a big statue in such a short time.” The statue is nearly 50 feet tall, and it was also revealed that it contains a portion of Lemmy’s ashes. “Our beloved Ian ‘Lemmy’ Kilmister, founder of Motörhead, has had a portion of his ashes enshrined at this year’s Hellfest Festival in Clisson, France within a new, giant statue of the man, and the official ceremony to recognize this unique memorialization will occur on June 23, 2022,” reads a post on the Motörhead Instagram account. “With band mates Phil Campbell and Mikkey Dee present, it is the perfect moment to honor Lemmy’s life. For fans that wish to share their own tributes, memories, experiences or pay their respects, can post using the hashtag #LemmyLivesAtHellfest.”

Longtime Motörhead drummer Mikkey Dee, who now plays with the Scorpions, will appear at this year’s Hellfest: “Great statue/monument of Lemmy being presented at Hellfest, France,” Dee said. “I can’t wait to come back to one of my favorite festivals in Europe. See you all there on Thursday!”

Hellfest takes place in two parts this year. Part 1 happened this past weekend, and part 2, which will include appearances by Metallica, Nine Inch Nails and Guns N’ Roses, is set for June 23 to 26. It was previously announced that Lemmy will also get the biopic treatment in a new film directed by Greg Olliver. Olliver previously helmed the 2010 “Lemmy” documentary.

In a 2015 interview with Kerrang! magazine, Lemmy was asked how it makes him feel when people call him a legend. “As long as they don’t believe it, that’s alright,” he said. “Who wouldn’t want a hero somewhere in their lives? And it might as well be me, ’cause I don’t take the piss out of them for it, and I don’t laugh at them because of it.” But he added, “I’m not a legend. I never thought of myself as being special in particular. Maybe I make brilliant music, but that’s about it.”