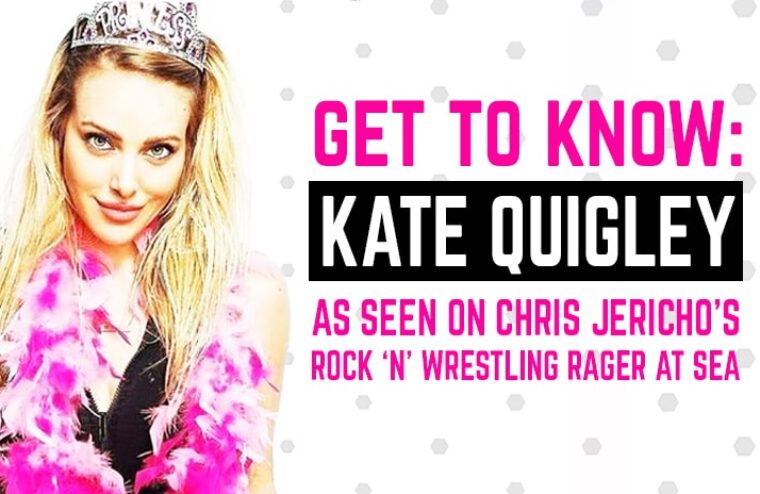 Kate Quigley has performed for a wide variety of crowds over the course of her stand-up career. She’s hosted the Adult Video News Awards, headlined clubs across the country, and she even took the stage at a few nursing homes back when she got her start. But perhaps no crowd was more unique than the one she performed to on Chris Jericho’s Rock ’N’ Wrestling Rager at Sea. “I told a joke about how women never sh*t in a guy’s house when they first start dating,” Quigley said of her cruise set. “Women always leave to go use the bathroom somewhere else. So I did this whole bit about it, and at the end I say how much I wish a guy would just sit me down and tell me it’s OK to sh*t in his house. And before I knew it, the entire audience was chanting, ‘Sh*t — at — my — house!’ It was so funny.”

For more than 15 years, Quigley’s fearless approach to stand-up has helped her crush comedy audiences nationwide both as a headliner and as a feature for comedy legends like Joey Diaz, Andrew Dice Clay, Dom Irrera and Marc Maron, among others. Quigley discovered her love for stand-up while working on improv at the Chicago College of Performing Arts, but comedy was something she had always immersed herself in while growing up in Canton, Ohio. “I loved Joan Rivers, Kathy Griffin, Robin Williams,” Quigley said. “When I was a little kid, I used to watch ‘Late Night at the Apollo,’ ‘Evening at the Improv,’ and I always wanted to act.”

“The wrestling fans are so fun to perform for, because they just latch onto whatever joke you tell, and they start chanting things. It was really, really fun.”

At an even earlier age, Quigley recalls begging her mom to move the family to Los Angeles so she could audition for Nickelodeon shows like “Double Dare” and “You Can’t Do That On Television.” “Which isn’t even acting by the way,” she said laughing. “I used to watch all those shows and want to be on them.” At 18, Quigley concocted a plan to move to California by joining the military but chickened out on the day of boot camp. While it took a little longer for Quigley to make it to the West Coast, Chicago proved pivotal to her career path. It’s where she discovered her true calling. “That’s where I got more into comedy,” she said. “It got to the point where I thought, ‘I’d rather do this on stage alone. Once I started, like a lot of comics, I fell in love with stand-up.”

Quigley is booked for the next Chris Jericho Rock ’N’ Wrestling Rager at Sea, which sails from Miami to the Bahamas from Feb. 2 to 6 in 2023. She also does a pair of podcasts and is consistently on the road. Recently, Kate talked about all things comedy — and about her Jericho Cruise experience — for a Web Is Jericho exclusive.

What was it like performing for a wrestling audience? “It was so much fun. First of all, we performed on the cruise in a wrestling ring. I didn’t know we were going to do that, and it was so interesting, because I’ve never been in a real wrestling ring before. First of all, I didn’t realize how hard the (mat) is. Before, I thought it was kind of like a trampoline in there. But once I started stomping around, I got out of the ring after the show, and my knees were sore, my ankles were sore, but it was great. The wrestling fans are so fun to perform for, because they just latch onto whatever joke you tell, and they start chanting things. It was really, really fun. Jericho is the absolute best. That was my first time meeting him, and he could not have been more kind.”

Is that that most unique audience you ever played for? “I’ve played for all kinds of different, unique crowds. I played a Mensa convention one time, which is all certified geniuses. I was nervous for that, too, because I was like, ‘I am way too stupid to tell jokes to these people.’ The wrestling fans really were more supportive. I just think they are really there to party and have a good time. They’re not there to worry about if your jokes are PC or not. They’re just there to have fun. I’ve done the AVN Awards, too, which is mostly porn stars. So that’s a unique audience. I’ve performed at nursing homes. When you do this job for a while, you tend to get in front of all kinds of crowds.”

Are you at the point in your career where you can pretty much roll with any situation? “I think so. You kind of have to be able to do that. You also have to be ready to abandon all your plans when it comes to what you were gonna do. When you walk up there and you find that the audience isn’t responding to where you start out, then you kind of have to be flexible to try something else. At this point my mantra is just to have fun on stage, because if you have fun, the audience has fun.”

Is there a stand-up you learned the most from? “I loved Joan Rivers growing up. I loved Kathy Griffin, as well. I used to watch ‘Evening at the Improv’ with my dad as a kid, which is why it’s so surreal playing now at The Improv. There’s also music artists that have influenced me. I’m a huge fan of Pink. I’m a huge fan of Eminem. I’m really a big fan of anybody who doesn’t change who they are to conform in this business. That’s really why I love Joan Rivers. She was telling jokes you weren’t allowed to tell with no apologies, and I really think she paved the way for women, especially.”

What about from comics you’ve shared the stage with? “Oh yeah. Joey Diaz had a massive influence on me. He’s stellar, and I’ve been so blessed to work with Joey so many times. He’s one of those guys that also flies by the seat of his pants a lot, and there are no rules when he’s on stage. I’ve been so lucky in my career. I’ve worked with Andrew Dice Clay and Dom Irrera and just so many legendary comedians you just hope to get to meet let alone work with. All those guys have been mentors to me. I try now that I’m getting older in my career to open the door to young comics that want to come on the road. I’ve had comics I’ve never even met drive a few hours just to do a guest spot, but they’re willing, and I’m happy to have them. You kind of have to pass that torch, I think.”

You hear comics sometimes talk about how long it took them to find their voice. With some, it’s sort of the 10-year rule, with others it happened faster. What was it like in your case? “It’s such a funny question, because I don’t think you realize it when it happens. To be honest, I feel like around two or three years in, I really had a moment where I stopped worrying about being funny. Like, you know you’re funny if you’re still there at that point. I started worrying about being myself, and I think that’s when you really find it. Then there’s kind of another moment. I think there was a night when I was at The Comedy Store. This is gonna sound arrogant, and I don’t mean for it to come off this way, but I had to kill time between Louie CK and Joe Rogan, because I was hosting, and I knew Joe was running late. And I wasn’t scared to fill the time. It was the first time I knew I could. That’s not to say I could follow anybody or anything, but when you know you have that confidence because you’ve been doing it long enough, you know your presence on stage. You know you can work with whatever time, you know you can just mess with the audience long enough to get through that. So I think it’s also just something about being comfortable and confident and knowing you will win even on a bad night.”

A recurring topic in your stand-up is your dating life, and last time we spoke you said that over the years you’ve made some bad choices with men. Has there been any development on that front? “Oh lord. That’s a loaded question. I had a boyfriend for a little over a year, year and a half, and that was the first guy I ever dated who was very famous. That was a whole other minefield. Without saying anything good or bad about that person, I learned that it is very difficult to date someone in show business who has a front to keep, if that makes sense. It’s kind of like a politician. I’m lucky, I’m a comedian. I can say whatever I want. If I do something stupid, I might have to apologize, but it’s not going to destroy my career. Whereas with some people, that’ can’t happen. I think the lesson I learned is, maybe not date another famous guy. (Laughs).”

Would you ever consider dating a wrestler? “Never say never. They are really hot. I definitely will say on the cruise, I was looking at all the wrestlers and saying, ‘Damn, I got myself in a good situation!’ And the girls are hot, too. The wrestlers are cool, because a lot of them have another gig. A lot of them have a side job. Britt Baker is a dentist. I was so blown away. I was like, ‘You are the ultimate catch.’ Maybe I’ll date Britt Baker!”

You’re doing the Jericho Cruise again in 2023, but what are some of your more immediate career plans? “I’m gonna shoot a special, and also I’m starting a new podcast. I’m still gonna have ‘Date Fails,’ but I’m also gonna have a podcast called ‘Quigley’s Big Adventures.’ It’s gonna be a podcast, but I’m also gonna do it as a web series. I’m real excited about that, because it will be a different thing to talk about besides just dating. I really want to get out exploring these small towns outside of the cities where I play.”