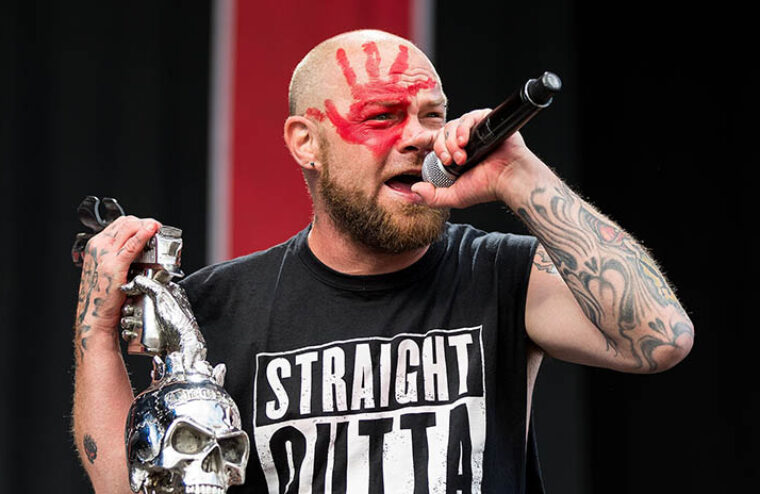 Five Finger Death Punch is touring the U.S. later this summer with Megadeth and is getting ready to release a new album, “Afterlife,” which is now available for pre-order. Last month, Five Finger Death Punch vocalist Ivan Moody injured his right eye during a Florida concert, and he took to Instagram to share a video explaining what happened.

“During the set I got overheated, and I walked back and I passed out… I was grabbing towards Charlie’s [Engen, Five Finger Death Punch drummer] kit,” he said. “And the heat — it was exhausting. Charlie almost passed out too. And I reached for a cymbal, and I felt myself going under. And so I ran back. And I was okay. My [guys] helped me out. And as I’m coming back onstage, one of the lasers kicked backwards, ’cause I tripped basically over it, and it shot me in the eye. And these things are like… they basically have the power of a minor supernova; they’re really bad. If you put your phone up to one of ’em, it’ll actually black out your screen.”

In a recent interview with Metal Hammer, Moody revealed that he was p*ssed off about the band’s 2020 video for “Living The Dream,” which featured plenty of anti-mask sentiment. Moody said the video was the brainchild of guitarist Zoltan Bathory and that he wasn’t pleased with having to answer questions about its message as the face of the band. “I showed up for two days and Zo told me to run across the grass, screaming and holding the American flag, so I was curious to see it,” Moody said. “Then when he released it, I called him, like, ‘You implemented your own platform into Five Finger Death Punch, and now I’m gonna have to answer for it, because I’m the singer.’ And it ended up going down like a fart in church!”

“There was the mask thing and the awkwardness of the whole thing. That’s what he visualized, but it’s not what I had in mind when I wrote it. For those who understood it, great. And for those who didn’t, I’m sorry, I didn’t agree with it either. I love Zoltan to death, that’s his opinion, but it won’t ever be done with my name on it again.”

Last month, Five Finger Death Punch bassist Chris Kael ripped on rockers and celebrities who say they’re leaving the country over politics. In a Twitter post, Kael called out those who make such claims. “No one cares about anything enough to pack up and move out of the country. It’s easy to say onstage, on TV and on social media; but, when’s the last time you actually packed your bags for anything longer than a brief vacation and a quick return home? Stop bullsh*ttin’.” He then tagged the tweet with the hashtag #USA.