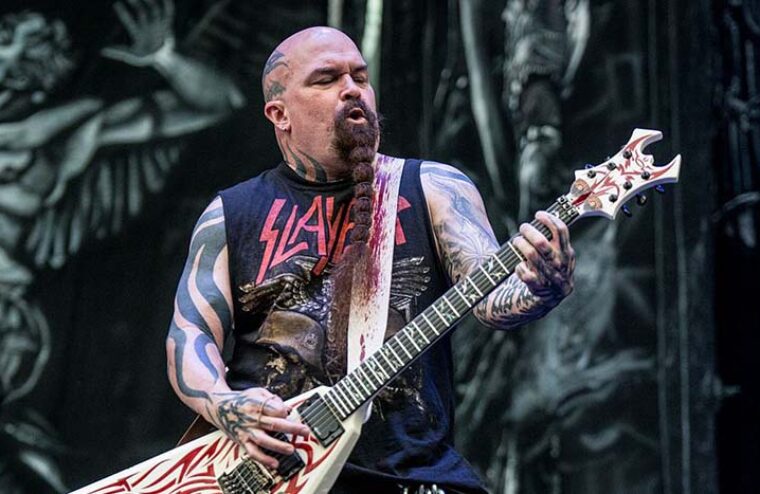 Slayer performed its final show in November on 2019 in Los Angeles. The thrash metal legends had performed since 1981 earning the distinction as one of heavy metal’s “Big Four” alongside Metallica, Anthrax and Megadeth, and the group has sold more than 20 million albums worldwide earning five Grammy Award nominations in the process. The band is countlessly sighted as one of the most influential thrash metal bands of all time.

Since disbanding, Slayer guitarist Kerry King has hinted at doing a new project, and recently radio DJ Nikki Blakk revealed that she heard most of the songs from the Slayer guitarist’s new band. She shared a photo on Facebook of her with King and his wife saying: “I heard the new #KerryKing songs last night & they are CRUSHING. The world hasn’t been the same without SLAYER But, now I’m looking forward to 2023. …and yes, I know who’s in the band, but NO, I won’t tell you. Sorry Blabbermouth.net #AboutLastNight #Slayer #NotSlayer #Metal”. She later added in the comments:  “It sounds killer! I loved all of it. Not a clunker in the bunch! I think I heard 8 or 9 songs.”

King previously spoke to Metal Hammer about the new project. “You know me, so you know what it’s going to sound like,” King said. “I played this new song for a buddy, and I said to him, ‘If there’s anything I’ve written in the last few years that sounds like Slayer, it’s this.’ And he said, ‘That sounds like you could have pulled it off of any Slayer record.’ I actually made that riff up backstage at a Slayer show. We were walking to the stage and I got my phone out and recorded it so I wouldn’t forget it.”

King also has confirmed that Slayer drummer Paul Bostaph is on board with the new band. “We just started rehearsing and the only person I can give away is Paul because I took him from Slayer and we work very well together. We didn’t start rehearsing until the end of March, and that was the first time since that last Slayer show at the end of 2019 that me and Paul finally got into a room together.” Had it have been up to me then I’d have been out in 2020. But that thing called the pandemic f*cked everything up for everyone. You know, I waited on that, because it had to run its course. I didn’t want to be the guinea pig; I didn’t want to learn how to tour again. I already did my dues; I don’t want to have to prove myself again. Have I been dragging my feet? Yeah, because I wanted this [pandemic] sh*t to get sorted. I won’t be dragging my feet much longer.”

Bostaph told Australia’s Riff Crew that the new band will “sound like Slayer without it being Slayer — but not intentionally so. I mean, Kerry’s been writing songs in Slayer his entire career, and he has a style,” he explained. “And that style, as a songwriter, you just don’t change your style because your band is done… So, all I can say is if you like heavy music and you like Slayer, you’ll like this.”