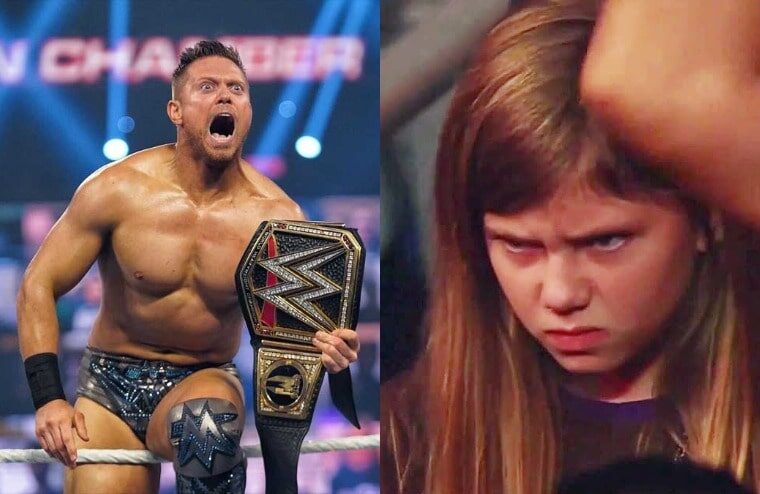 Drew McIntyre retained the WWE Championship in the main event of WWE’s Elimination Chamber pay-per-view last night by last eliminating AJ Styles. Following the hard-fought victory, he was mercilessly attacked by Bobby Lashley. This allowed The Miz to cash-in his Money in the Bank contract, and within 30 seconds of the bell ringing, he’d become WWE Champion. This would be The Miz’s second successful cash-in, as over a decade ago, he defeated Randy Orton in the same fashion on Raw.

In that Raw crowd was a ten-year-old girl who was shown on-screen visibly annoyed and upset with The Miz winning the title. She’d become known to fans worldwide as wrestle “Angry Miz Girl,” and WWE would end up flying her to New Orleans to be involved in the Slammy Awards, where she’d meet The Miz.

The girl whose real name is Caley has sadly previously revealed she no longer follows wrestling. Still, Sportskeeda reached out to her following The Miz’s success last night to get her opinion on him recapturing the title.

I personally think he’s one of the best on the roster, I know it’s a big change from my opinion 10 years ago, but I love him when he’s a heel champion, I think he’s got the personality for it down to a T. I loved meeting The Miz and he was always super kind to me, and he worked super hard, so I definitely think he deserves it. Angry Miz Girl

It had seemed likely The Miz would eventually succeed in winning the WWE Championship as he had been given the briefcase back after failing to cash-in at December’s TLC PPV. This was done due to John Morrison technically being the one who cashed in, and to have him fail twice would have been a burial.

While WWE’s long-term plans aren’t clear and continuously in a state of flux, it appears that McIntyre and Lashley will be squaring off at WrestleMania 37. It’s possibly The Miz will be involved, although with him feuding with Bad Bunny, it wouldn’t be a surprise to see the rapper cost The Miz the title ahead of WrestleMania.