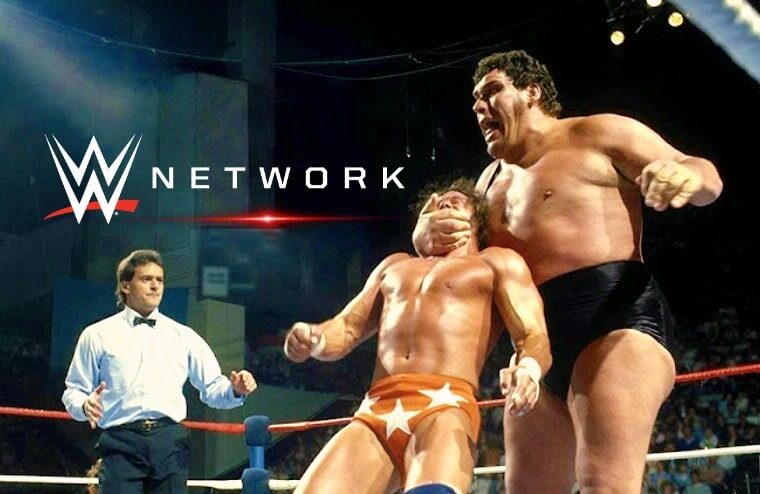 Before we dig into this topic, allow me to state that I am a huge fan of WWE Network and greatly appreciate what it allows wrestling fans to do.  I grew up in the VHS-era when tracking down wrestling matches was a time-consuming quest, often resulting in spending considerable cash for less than quality copies of bouts from the past.  Now, fans can simply open a browser and seek out matches, and with WWE Network, pay an insanely low price for hours and hours of content at their fingertips.  Yes, some fans will complain about certain aspects of the service, but at $9.99 (soon to be less) a month, you’re getting tons of material to check out.  I paid way more than that for a fifth-generation copy of the Terry Funk-Jerry Lawler empty arena match back in the day.  Anyway, I digress….

Last week, WWE Network decided to promote their service with a video on their YouTube channel that was titled “Andre the Giant’s greatest moments: WWE Playlist” with a description that stated, “Look back at The Eighth Wonder of the World’s best moments.”  My thought as I clicked on the almost nine-minute video was, “I wonder what else they selected besides Wrestlemania III” because I just knew that would be featured.  WWE always pushes the Hulk Hogan vs. Andre The Giant battle when they dip into the nostalgia bag, and I don’t blame them for it.  It was the most famous wrestling match of the 1980s, the main event of that era’s biggest show. Was it Hogan’s best match from an in-ring standpoint?  Nope.  Having had major back surgery and dealing with his deteriorating physical condition, Andre was far removed from his best days in the ring.  However, you cannot deny the importance of the match in wrestling history, and it being included was a given.

Yep, there it is, right off the bat, Andre vs. Hogan, Wrestlemania III, March 29, 1987. Andre’s greatest moments starts with his most famous loss, as we get a few moments of his offense from this battle.

Next up… Hogan vs. Andre from The Main Event (which they mislabeled Saturday Night’s Main Event, even though this was a live Friday broadcast on NBC), where Andre wins the WWF World Title.  We see the finish of the bout, which marked the biggest championship win of Andre’s career.  We are spared Andre giving the title to Ted DiBiase and the “twin referee” angle with Dave and Earl Hebner.  This is the most-watched match in wrestling history on broadcast television ever (and given how TV viewership has splintered, it probably always will be).  I can see the inclusion here; it makes sense as a “greatest moment” in Andre’s career.

Moving on from the Hogan matches, we then get… Andre choking Bob Uecker at Wrestlemania IV on March 17, 1988.  Yes, the legendary baseball announcer was hilarious in this interview, and his reaction to Andre “choking” him is somewhat iconic… I guess.  Anyway, moving on….

Andre The Giant vs. WWF World Champion Randy Savage from the November 26, 1988 edition of Saturday Night’s Main Event.  Andre worked a series of matches with Savage at this point, all resulting in disqualification and count-out finishes.  This clip features Andre choking Savage, Savage trying to mount a comeback, and Andre choking him again.  I have no clue what made them select this match.  It isn’t even Andre’s best Saturday Night’s Main Event bout.

Our last clip is from the “Colossal Jostle” match at Madison Square Garden between Andre and King Kong Bundy on September 23, 1985, the only bout selected before Andre’s major back surgery.  This was actually a very hyped match, with Andre as the reigning Giant and Bundy as the fast-rising monster who would be set up as Hulk Hogan’s Wrestlemania II opponent.  We get a little bit of the action, which by today’s standards would get booed out of a building.  However, the fans were behind Andre, and King Kong Bundy sells all of his moves in the way two big men should sell their shots.  Not a bad clip, but again, is this really a “greatest” moment?

Ultimately, what really disappointed me about this collection is what appears to be a lack of effort in going into the massive treasure trove of available options.  Yes, Wrestlemania III and Andre’s title win were huge moments, and I can’t (and won’t) argue against including them.  However, they could have been balanced with some clips from earlier in the Giant’s career.

The Bundy and Savage moments could have been replaced by bodyslamming Big John Studd at the first Wrestlemania or winning the NFL-WWF battle royale at Wrestlemania II.  Yes, Andre was past his prime then, but they were at least monumental victories. How about the steel cage matches with Studd or Kamala?  Andre vs. Hogan from Shea Stadium, the match WWE pretended didn’t exist during the Wrestlemania III build? Maybe a territorial clip from one of the libraries WWE has obtained over the years.  Would it have been so hard for whatever intern was given the job of putting this montage together to do a simple search on the network and dig a little deeper? WWE owns numerous libraries beyond their own rich WWF history, and there’s plenty of Andre clips to be found, including many where his condition hadn’t slowed his ability in the ring.

Some will write this off as the ramblings of an old Andre mark, which I admittedly am. However, I can do a few searches for Andre vs. Stan Hansen, Seiji Sakaguchi, Strong Kobayashi, Harley Race, and others and find plenty of videos to watch from the past, in addition to what WWE Network has to offer. I can certainly enjoy plenty of action from a more mobile Andre very easily.  I certainly don’t need WWE Network to make suggestions for me.

However, that isn’t the point.  From a business perspective, what is the purpose of these YouTube videos?  To get people to subscribe to the WWE Network.  Does a bunch of clips from the twilight of Andre’s career entice you to do that?  What if you saw a young Andre, far different than the slow-moving legend from the last decade of his life?  I feel that might get someone interested in checking out more from a truly unique character in an industry full of them.

WWE Network should have done better here, and they could have.  Not only for Andre but for promoting their own service.