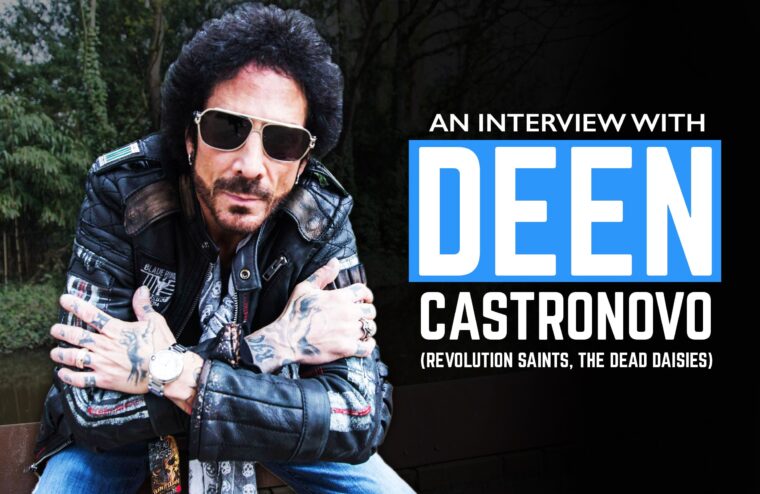 “Supergroups” are a mixed bag. Combining creative personalities and egos seems to either work great or die in the rehearsal room.

Frontiers Music alone has put together dozens of them to varying degrees of success, but they have hit an absolute home run with Revolution Saints.

There’s no shortage of well-crafted tunes coming from the Frontiers production staff for a variety of its roster (Alessandro Del Vecchio wrote the bulk of “Rise” with contributions from Blade, Aldrich and Passion vocalist Dan Rossall), but no group better molds those songs Revolution Saints.

“Well you’ve got an amazing pedigree there,” Castronovo said of what makes the band click. “Jack is one of the greatest bassists and songwriters that I know in my generation. And Doug, he gets his due, but he’s underrated and just a great songwriter.”

“Me, I don’t do nothing but play drums and come sing the stuff,” he continued with a laugh.
Castronovo jokingly downplayed his contributions, but his unique voice — equal parts Steve Perry and Rod Stewart — gives the project one of the most unique sounds in the world of melodic rock.

Lead single, “When The Heartache Has Gone,” is an upbeat rocker with a hugely anthemic chorus. The title track sports some outstanding fretwork from Aldrich. “Higher,” with Blades contributing a significant portion of the vocals, rightly sounds like a long-lost Night Ranger hit. Blades also dusts off and updates a stellar ballad written with Damn Yankees pal and Styx guitarist Tommy Shaw, “Eyes of a Child.” And “Million Miles,” Castronovo’s favorite tune on the album and easily the most inspirational, might be the best of the bunch.

Castronovo discovered his singing ability at a young age but didn’t get the chance to truly showcase it until getting the chance to sing a portion of the live set with Journey.

“In 2006, (then-Journey singer) Steve Augeri had some throat issues,” Castronovo said. “The guys asked if I wanted to try and sing some of the tunes. I was like, ‘Oh God, dude. I guess I’ll give it a try.’ And thank God. It came out really good, and I’m really grateful they gave me that shot. Then I was able to realize I could get better at this. I kept going and going, and here we are.”

Recently, Castronovo talked about “Rise,” the future of Revolution Saints, the forthcoming Dead Daisies record featuring Rock and Roll Hall of Fame, Glenn Hughes, as well a host of other subjects.

Q. How did the recording of “Rise” compare to Revolution Saints’ previous two albums?
A. “The difference was Doug and Jack got to write a few more songs this time, which was kind of nice. They’re such great songwriters. We got it together kind of the same way we did the first one. I did the drum tracks first. Then they sent the drum tracks to Jack. Jack did all the bass stuff, sent it to Doug, and Doug did all the guitars. It was kind of like the first record where everybody was in different places and busy doing different stuff. The second one was a little different, in that Doug, Jack and I were together to do a lot of it, which was pretty cool. But it has worked both ways.”

Q. On Mitch Lafon’s podcast, you hinted this might be the band’s swan song.
A. “If everybody’s digging on what we’re doing, I’m sure we’ll do another one. But it all has to do with scheduling. That’s the hardest part is getting everyone together and setting aside time to do it. I hope we do another one, but we’re not sure.”

Q. Revolution Saints has more albums than live performances, if I’m correct?
A. “Yes! (laughs) We’ve only been able to do one show. Jack’s busy with Night Ranger, and now that I’m with Doug in The Dead Daisies, that band is just a live juggernaut. We’re nonstop in the Dead Daisies.”

Q. Speaking of The Dead Daisies, how is the forthcoming record coming along?
A. “Really well. I just finished background vocals last week, and I hadn’t heard the stuff since I did the drum tracks. We all were in France. We wrote the songs there, did the drum tracks. Then I had to fly out and come home. And after the first of the year, I was doing some jamming with some guys from Rascal Flatts, so now I’m a country artist, too! (laughs) I can do it all! But then we were back doing the background vocals for the Daisies and it was the first time I heard it all recorded, and I said, ‘This is great.’ I didn’t expect .. I knew it was gonna be good, but I was really impressed with what they had done. Ben Grosse is an amazing producer and I love working with him.”

Q. And now Glenn Hughes has taken over bass and vocal duties. Him joining the band had to be mind-blowing.
A. “Dude, I’ve always known him as a bass player, but to be in a room with that man, and the tone he gets … the bass tone and the way he attacks a bass is like a drummer’s paradise, bro. He locks it. It’s like a glove. I’ve only played with three or four bassists that do that. One is Geezer Butler of course. Jack is another, and now I can add Glenn to the list. He’s just a monster. He’s got his own pocket, and you can just kind of fit right in with it. And the voice, I mean, come on. It’s like, ‘How do you do that at 67 years old? How are you nailing it like this?’ He’s a freak of nature!”

Q. Was there an adjustment period with Glenn’s arrival?
A. “The adjustment wasn’t as hard as we thought it might be, because Glenn’s an icon. I definitely wanted to step up my game. It wasn’t even really an audition when he showed up. We played four or five songs, and it was like, ‘Yep. Him joining is a no-brainer.’ I love and I miss (original bassist) Marco (Mendoza) and (original vocalist) John (Corabi) a lot. I love those guys to death, but Glenn definitely has fit his way in really well. It feels great and sounds great, and I’m excited to go on the road.”

Q. What were the circumstances surrounding John and Marco’s exit?
A. “Marco wanted to do his solo record. He had just finished it, and he was touring it really hard. John, I think he felt he had done as much as he could with the Daisies. He wanted to kind of go on his own as well, and they both parted ways amicably, of course. I still bug the crap out of both of them every day! (laughs) I had done a bunch of projects with Marco, and with John, The Dead Daisies was the first one I had ever done, but we just bonded. I love him to death. I would take bullets for both of those guys.”

Q. What’s the next year look like after the record is out?
A. “The record comes out in February or March, and we start rehearsals April 17, and then we’re gone until December. We’re gonna be doing South America this year and Japan and Australia. Then we do the States again and Europe.”

Q. You’ve also appeared on a lot of other Frontiers releases, and one that really stood out was the project you did with (Hardline vocalist) Johnny Gioeli, “Gioeli/Castronovo.” Any chance of a sophomore release?
A. “That was a great record and a lot of fun to do, but we don’t know about a second one. It can’t happen in 2020 because of our schedules, but maybe in 2021.”

Q. Another record you played on that’s a personal favorite was “White Light, White Heat, White Trash” by Social Distortion. How did that come about?
A. “It was a favor for one of the producers. They were having issues with their drummer, and they asked me to come in. I did it for really cheap, because he’s a buddy of mine. I went in and it took me like three days to get 14 tracks done, and it came out great. I’m really proud of that record. It’s actually one of the favorites I’ve done. They listed Chuck Biscuits as drummer, because he joined the band right after that, but it was me on the record! (laughs)