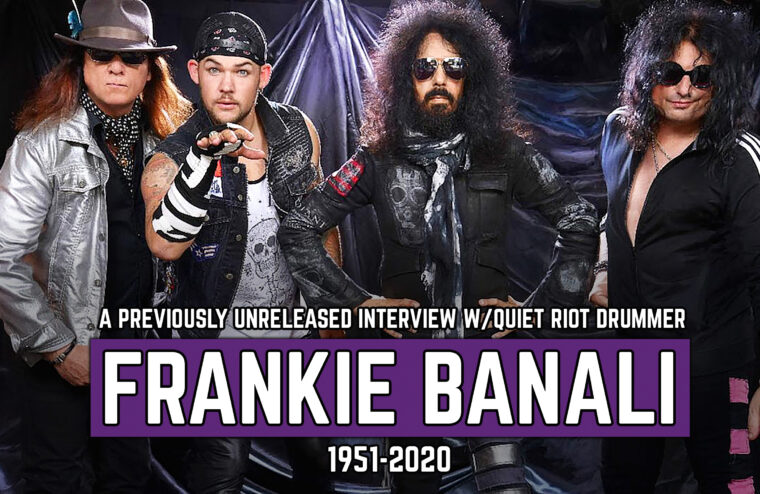 (Author’s note: This interview with Quiet Riot drummer Frankie Banali took place in July of 2017 to promote the band’s first album of all new material in more than a decade (“Road Rage”). It was originally intended to be used in The Canton Repository (CantonRep.com) to promote a regional Northeast Ohio concert featuring new Quiet Riot singer James Durbin, but the Durbin-fronted version of the band never gigged in the area. By the time Quiet Riot did play in Cleveland a few years later, Durbin had exited the band — the latest in a long list of singers to come and go from the Quiet Riot ranks since the passing of original vocalist Kevin DuBrow.

Sadly, Banali died on Aug. 20 due to complications from pancreatic cancer. I decided to pull this interview from my archives for a Web Is Jericho feature, because aside from never being published anywhere, it highlighted a rare time in Banali’s life. It seemed he had found true happiness in performing and playing music for the first time since DuBrow’s death.
RIP Frankie Banali.)

It’s smack dab in the middle of summer 2017, and for the first time in more than a decade, Quiet Riot’s Frankie Banali is grinning ear-to-ear — and he means it.

But for the next seven years, the band went through singers quicker than beer turns into piss. In 2017, Banali finally found his man in former “American Idol” contestant, James Durbin. And even though the honeymoon only lasted two years (Quiet Riot singers vanished faster than Spinal Tap drummers), it was the first time since DuBrow’s passing that Quiet Riot felt like a serious band again.

“For the first time since Kevin was in the band, I’m having a really good time,” Banali said during an interview to plug the Durbin-fronted album, “Road Rage.”

“(Bassist) Chuck (Wright) pointed out that he hasn’t seen me laugh this much in over 10 years. And if you look at the video of ‘Can’t Get Enough,’ you will see that there’s a lot of times I’m smiling and laughing, and that’s not put on. It’s just me watching everything that’s going on around me and saying, ‘This is fun again.’ ”

“Road Rage” was 11 tracks of classic sounding Quiet Riot — a mix of ’70s-inspired hard rock and glam metal — and the band and its fans were unified in the fact that Quiet Riot was finally again firing on all cylinders.

Here is Banali back in 2017 talking all-things “Road Rage,” James Durbin and the not-so-quiet history of Quiet Riot.

Q. How Quiet Riot hook up with James Durbin?
A. “Originally he was my first choice to do ‘Road Rage’ after I signed the deal with Frontiers, but at the time, he was unavailable due to being signed on to another project. So it was a waiting process. Right at the right time when we needed him the most, his commitment to that project had ended, and he was very happy to come on board. He’s made the difference, and he elevated the songs that I had written with (guitarist) Alex (Grossi) and Chuck and my writing partner, Neil Citron. He brought it to the level where they needed to be and to what the songs deserved.”

Q. James is the first singer you’ve had since Kevin that a lot of people are really excited about. He has the pipes and the charisma to do serious justice to the band. Have you been able to explore more of the back catalog live now that you have him?
A. “Absolutely. When we first brought James on board it was to do some live dates with us that we already had on the books. He came very well prepared. It was never a case of auditioning him. We never auditioned him, because I knew he had what it took. I just sent him the setlist with the original recordings and the live versions so he could hear the differences between them. We did all of two rehearsals with him, and we flew out and did a date. There is only one Kevin DuBrow. So understanding that, I knew I needed to find somebody that was also a complete package as Kevin was, and James is that person. He’s got an unbelievable range, so it makes it possible for him to easily sing the old Quiet Riot material, and he’s got that energy that Kevin had, because Kevin loved performing, and so does James. For the first time since Kevin left us, we’re really at a point where everything is as it should be.”

Q. Would you say he’s the first true frontman you’ve had since Kevin?
A. “No question about it. And there’s no gray area there whatsoever. Everyone else pales by comparison, and I think everybody else knows and understands and agrees with that.”

Q. Since Kevin’s passing, what have been the biggest challenges in the last decade? You chronicled your singer struggles in the 2015 documentary “Now You’re Here, There’s No Way Back,” but can you speak to how difficult the path has been to get to this point?
A. “When you have to get somebody else to come in and fill the void of a musician in a band, it’s hard enough. It was made that much more difficult for us because Kevin was such a huge presence and iconic singer and one of a kind really on every level. The other difficulties, and I went into the situation eyes wide open, is I knew that a lot of people were not going to accept the fact that I wanted to continue Quiet Riot after Kevin had passed. But I was prepared for that. The criticism and the insults that have been thrown my way, it really doesn’t matter, because I believe in Quiet Riot and I believe I’m doing the right thing, and I know Kevin would agree. So you just have to move forward. As difficult as it is, I never thought I was going to be able to move forward after Kevin passed away, but I chose to do so, and I’ve done the best I could.”

Q. What have been some of the band’s best moments since reforming?
A. “The fact that I’ve got a great team with Chuck Wright and Alex Grossi. They’re both great people and great musicians, and they’re both very supportive and very loyal. That has made it possible for me to understand that this is the right decision to make. I knew this was gonna be a work in progress, and I didn’t expect things to run smoothly or things to happen quickly, but it has taken years from the point Kevin passed away to this juncture where I felt comfortable enough to record a new record 11 years after the last official Quiet Riot album, which was “Rehab” with Kevin. And to actually do a music video, which is something Quiet Riot hasn’t done in nearly 30 years, was fun and outstanding.”

Q. Did the documentary help re-invigorate interest in the band?
A. “The response was really good, because it was a film that Quiet Riot fans were really interested in knowing the story, but it went broader than that. And people that weren’t Quiet Riot fans or really fans of this type of music, found the film to be engaging, because it’s a very true and honest story. It’s about Quiet Riot, but it’s also about the people and humanity involved in the story. It reached a much greater audience than I expected, and it also gave everybody an inside view as to what it’s like being in a band. A lot of people think being in a band is this glamorous thing, and it’s a party 24 hours a day, and that’s far from the truth.”