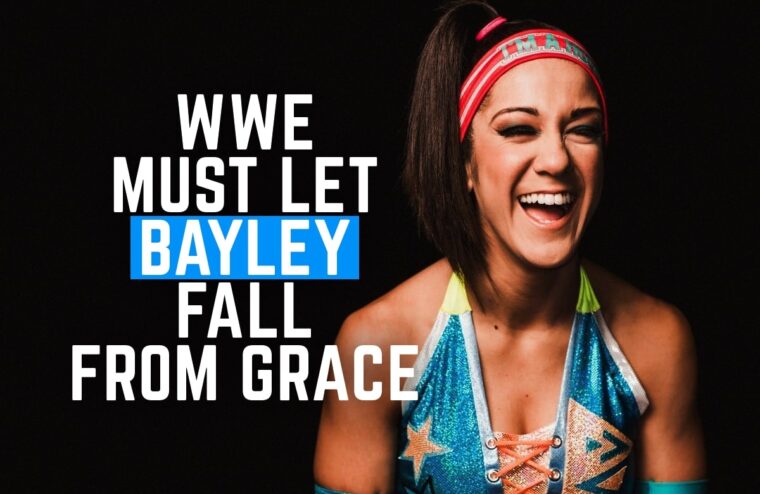 Bayley has shown minimal heel tactics since attacking Becky Lynch with a chair a couple of weeks ago.  Her tactics against Charlotte Flair at Clash of Champions were somewhat questionable (Sidebar…is Charlotte a face now?), and she seems destined to be by the side of a heel Sasha Banks for the foreseeable future.  Outside of this, Bayley Buddies are inflated, the music remains chipper, and Bayley is still giving hugs like The New Day gives pancakes.  Even after having to sit through some guy named Rocky Maivia as a child, this is hard to boo.

Unfortunately, it is also easy to ignore.  Fortunately, the table is set for a solution.

Bayley’s attack on Lynch showed she has a beast within her, a beast kept at bay when she refused to use a kendo stick on Alexa Bliss, even with the WWE Women’s Championship on the line, at Extreme Rules 2017.  Her career has fizzled since, as even her current run as SmackDown Women’s Champion has been somewhat quelled by the rise and title run of Becky Lynch.

Despite crowd sing-a-longs, an infectiously positive attitude, and hugs that could melt even Vince McMahon’s frozen iron lung of a (kayfabe) heart, the character of Bayley has been betrayed, battered, bruised, and beloved by little besides Sasha Banks and girls under the age of ten.  The way of seeking acclaim and applause lies madness.  Bayley now needs to embrace the madness her wayward path has led her to.

Bayley was (still sort of is) the embodiment of the “PG Era” WWE is slowly walking away from.  Luckily, she was so hyperbolically cheesy that the NXT crowd, a diehard wrestling crowd, found her to be charming and almost a mockery of an otherwise vanilla WWE product.  The embrace she felt from the NXT crowd quickly dissipated once he arrived to the main roster, as the primary WWE crowd tends to not tolerate white meat babyfaces for very long.  The love she felt at NXT has not fully returned at any point, even after multiple championship reigns.

WWE creative must realize that Bayley is over with the crowd thanks to being one of the initial driving forces of the Women’s Revolution, but has most likely hit the ceiling in terms of her potential star power.  Despite each of the other Horsewomen dipping their toes into the pool of heeldom, if not fully diving into that pool, Bayley has stayed pure.  Her purity, however, has not been rewarded with the status garnered by her Horsewomen counterparts.  With years left in her career, it looks like WWE need to allow their resident “Hugger” to embrace the dark side.

A character study is now on the hands of WWE creative, as Bayley might be the ultimate example of the fact that nothing gold can stay.  Unlike those around her, she has spent years wanting the gold to stay and wanting her hugs to infiltrate a company that typically does not have time for affection.  Like so many who tend to turn their backs on the ways of the righteous, Bayley just needed a hug.  Her arrival to the WWE main roster was met with stone, and now WWE may have a Bayley that wants to set flame to the company she worked her entire life to join.

WWE might be transitioning a character who realizes that the industry she dreamt of has no time for her hugs.  Now, in the eyes of Bayley, everyone needs to bleed.  If Bayley is going to reach the summit that Lynch, Charlotte, and Banks have reached, she might have to leave her soul behind.  Hopefully, WWE sees this and let us watch her fall from grace.