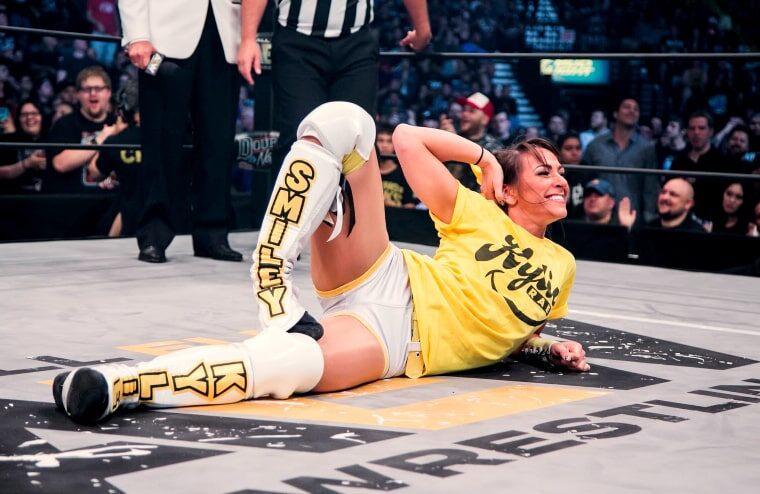 Last month it was reported that former AEW talent Kylie Rae was in attendance at the Performance Center for a WWE tryout. This was surprising as the recent NWA talent has battled mental health and alcohol issues in the past and seemingly couldn’t handle the pressure that came with working for a major wrestling promotion.

Nevertheless, she impressed the right people, as she would wrestle Dana Brooke ahead of Raw for Main Event under the name Briana Ray. And now the 30-year-old has provided an update to the Going Broadway Podcast, telling them that she was told there wasn’t a spot for her right now. However, she has still been doing extra work for the company.

Never say never, to my knowledge, not in the Rumble. As far as something long-term, at this point, I got the, ‘not right now’ deal, which is okay. If it’s meant to be, it’ll happen. If it’s meant to be, it would have happened. It’s more so, they’re having us still come back for extra work, I was there this past Friday and the Friday before.

Rae became known to most wrestling fans when she signed with AEW back in 2019 and debuted at Double or Nothing. She was subsequently expected to compete at Fyter Fest but was surprisingly replaced by The Bunny. And afterward, Tony Khan revealed she had requested her release, which he’d granted. A few months later, she resumed her career on the indies and signed with Impact Wrestling before retiring after skipping Bound For Glory. Since then, though, she would get the help she needed regarding her aforementioned issues and had been wrestling for Billy Corgan’s NWA promotion.