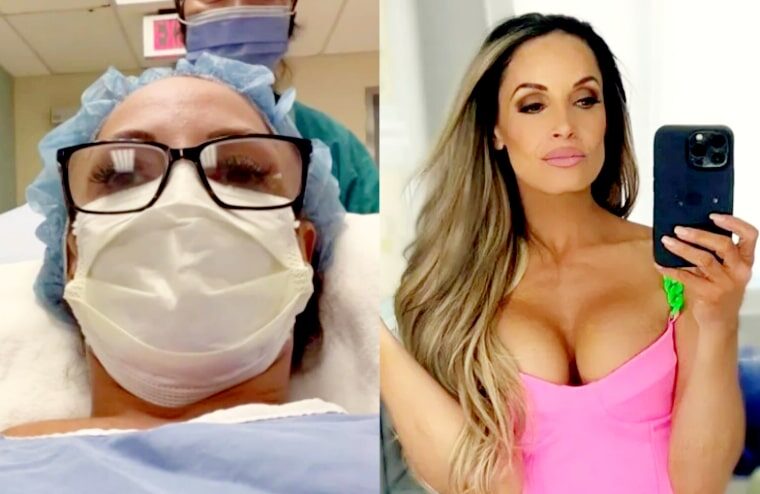 Seven-time WWE Women’s Champion Trish Stratus has taken to Instagram to reveal that last week, she had her appendix removed. Apparently, the WWE Hall of Famer was suffering cramps and initially thought it wasn’t serious after a Google search. However, after the pains got worse, she drove herself to the emergency room, where appendicitis was diagnosed, and she now has three new scars.

After a crampy 10 hour travel day on Monday I was working through the pain on Tuesday prepping for an announcement (which I will post tomorrow). I have a pretty high pain tolerance so when what I thought was 💩 cramps but ended up getting pretty intense I drove myself to emergency and turns out my appendix was getting ready to burst – which can be really bad if it happens and like cause death and stuff so I’m really glad I went to check it out, you know to avoid the whole dying thing.

Some takeaways – listen to your body. Dr. Google told me appendicitis was pain in the lower right abdomen, so that’s why it took me a while to think it was that because at first the pain was all across my belly. But after getting another Dr. Google’s opinion (reading another article) I found out it will start as pain across your stomach (also was tender to touch) but as the appendix gets more inflamed the pain will migrate to the right side and continue to to get worse. And boy did it. Turns out it’s an organ that serves no function so good riddance old pal.

Got 3 new scars to add to my body badges and one less organ … recovery hasn’t been too bad so far, definitely manageable. Just wanted to check in! xo Big thanks to my OR team at @mackenziehealth!!

Stratus officially retired after her loss to Charlotte Flair at SummerSlam 2019. Nevertheless, aged just 46, it would take a brave person to wager on her never wrestling again, especially considering she has kept herself in great shape. And in fact, the WWE Hall of Famer recently made an appearance on WWE television when the company held Raw in her hometown of Toronto last month, where Damage CTRL heckled her before Bianca Belair, Asuka, and Alexa Bliss made the save.