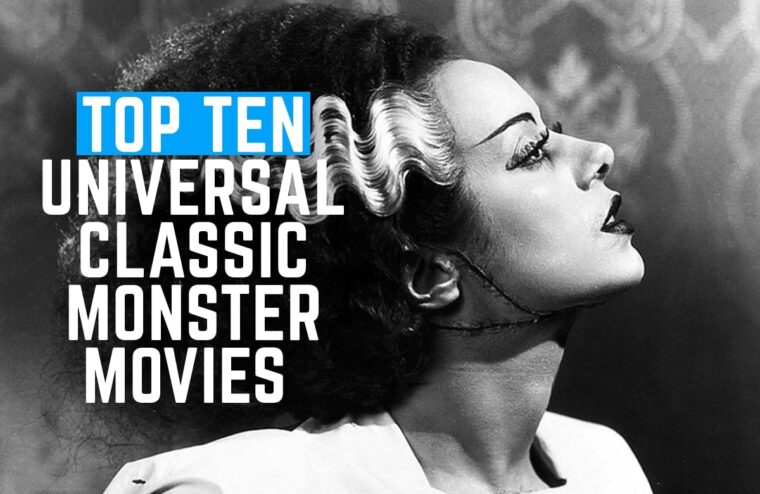 As a kid in the 80’s, my first horror movie experiences were based in the classic characters of that decade: Freddy Krueger, Jason Voorhees, and Michael Myers.  Those were the movies (and sequels) that I grew up on, a mixture of humor and violence that made the characters iconic… but not quite legendary.  That category was reserved for the classic monsters: Dracula, Frankenstein and the Wolfman.  These characters were so ingrained into pop culture by the time I first discovered them, it felt like common knowledge.  EVERYONE knew them, what they looked like, and what they sounded like.

However, the modern vision of Dracula, Frankenstein and The Wolfman didn’t come to us from the original stories and novels.  Rather, it was the Universal Studios movie versions of them that generations have cemented in their minds.  Dracula’s cape and accent didn’t come from a book, it came from Bela Lugosi’s portrayal. Frankenstein’s Monster as we know it isn’t what Mary Shelley wrote about, it is what Boris Karloff did while wearing makeup artist Jack Pierce’s creation.  Lon Chaney Jr.’s transforming Wolfman is what has inspired countless imitators, not just of werewolves, but all human-into-monster moments.

So, given their powerful influence on pop culture, the impending Halloween holiday, and just the fact I really dig them, I thought I’d give a countdown of my favorite Universal Monster movies.  I realize black-and-white flicks aren’t everyone’s cup of tea, but for those willing to stretch their viewing beyond what is suggested on their Netflix accounts, I implore you to check these out.

10. Creature From The Black Lagoon (1954) – Some people debate whether the Creature gets included with the classic Universal Monsters, since he was created in the 50’s, but I see him as the last iconic Universal Monster. Plus, the underwater sequences are amazing for the time. This movie also spun-off two lesser known sequels that are worth seeking out as well.

9. Bud Abbott and Lou Costello meet Frankenstein (1948) – Who says monster movies always have to be scary? In fact, some of the best horror films usually have an element of humor. In this case, it is all about the laughs, as Abbott & Costello get Bela Lugosi as Dracula and Lon Chaney Jr. as the Wolfman for this romp (sadly, no Boris Karloff as Frankenstein’s Monster here).

8. House Of Frankenstein (1944) – The success of Frankenstein Meets The Wolfman in 1943 led Universal to try mashing up some more monsters together, with varying results. However, the best of the bunch is this overlooked gem, which includes Dracula, Wolfman, and Frankenstein’s Monster along with a Hunchback and a mad scientist. It really feels like two separate stories, as Dracula never interacts with his fellow monsters, but what makes this movie work is Boris Karloff as the scientist. His performance is great, and there is something fitting about his final interactions with Frankenstein’s monster, the role he made famous (played here by Glenn Strange).

7. Son Of Frankenstein (1939) – How do you follow up two of the greatest classic monster movies of all time? This film couldn’t possibly match the first two Frankenstein films… but in a lot of ways it does them one better with an amazing cast that includes Basil Rathbone as the son of the original Dr. Frankenstein, Bela Lugosi as Ygor, and of course Boris Karloff in his final movie role as the monster. If you’re a fan of Mel Brooks’ Young Frankenstein, you’ll see where a lot of his source material came from.

6. The Phantom Of The Opera (1925) – There have been dozens of versions of this tale, but this silent masterpiece (yes, you can have a good film without dialogue) has the epic “unmasking” moment of Lon Chaney’s famed Phantom face, the shocking appearance of color tints, and has an eerie vibe that still comes across today. Yes, in 2019 when special effects and CGI can do so much more, this movie does just enough to pull you into what is essentially a simple story.

5. The Mummy (1932) – The guy wrapped in toilet paper with his arm outstretched, moving ridiculously slow? Yeah, that happened in the numerous sequels. This movie is all about Boris Karloff being super creepy in a movie with a rather involved story that is shockingly violent for the time.  If you don’t believe me, the scene where the grave diggers are killed with spears so they don’t reveal the location later may change your mind.

4. The Wolfman – The original plan was for us to never see the wolf, with all action happening off-screen, making the film more a mystery than a monster flick. Hard to imagine, since Lon Chaney Jr. would go on to reprise the role numerous times, with his transformation scene one of the most memorable moments in Universal history. Plus, it inspired Ozzy Osbourne’s “Bark At The Moon” which is just all kinds of awesome.

3. Dracula – Everything we think of when we think of Dracula, is because of Bela Lugosi’s portrayal of him in this Tod Browning-directed film that launched the 1930’s era of talking monster movies. The styles of dress, voice, mannerisms and look is all Lugosi, which is why it is fitting he was actually buried in a Dracula cape. While the original film features no music outside of the opening title, composer Philip Glass made a score decades later that serves the film well.

2. Frankenstein – Very hard not to make this number one. Much like Dracula, Boris Karloff’s Frankenstein monster is what we all think about when we hear “Frankenstein” mentioned. The story is well done, the sets are incredible and Colin Clive does an incredible job as the perfectly sane doctor with an insane idea that he can create life.  An all-time classic, and while I rank it number two on my list, it is the movie you need to watch first, for obvious reasons.

1. Bride Of Frankenstein – Hollywood has a history of churning out a sequel to a hit movie.  Sometimes, it turns out to be a bad idea (okay, more like 90% of the time).  But when it works, we end up with true gems like The Empire Strikes Back, The Wrath Of Khan, Aliens… and Bride Of Frankenstein, which may be the first case of a sequel being superior to the original.  It is debatable, and I wouldn’t blame those who select the first entry, but there’s just so much more to this movie.  Colin Clive is back as Dr. Frankenstein, trying to recover from his epic failure.  Boris Karloff is again the monster, but this time becomes an even more sympathetic figure.  The creepy Dr. Pretorius played by Ernest Thesiger gives the audience a true villain to despise. There’s even a nice dose of humor and special effects, but none of it takes away from the story.  The supporting cast is great, and my only regret is that director James Whale wasn’t allowed to make the film longer, exploring some of the side plots that had to be dropped.  Yes, it isn’t really about the “Bride” for the most part, but that doesn’t matter.  The best of the bunch, and a must watch, not just in monster history, but cinema history.