Buck Woodward has given his unique take on professional wrestling for over two decades. His involvement in the wrestling industry includes work in print, radio, television and the web. In addition, his long-standing love of heavy metal and classic horror films make him the perfect contributor to WebIsJericho.com 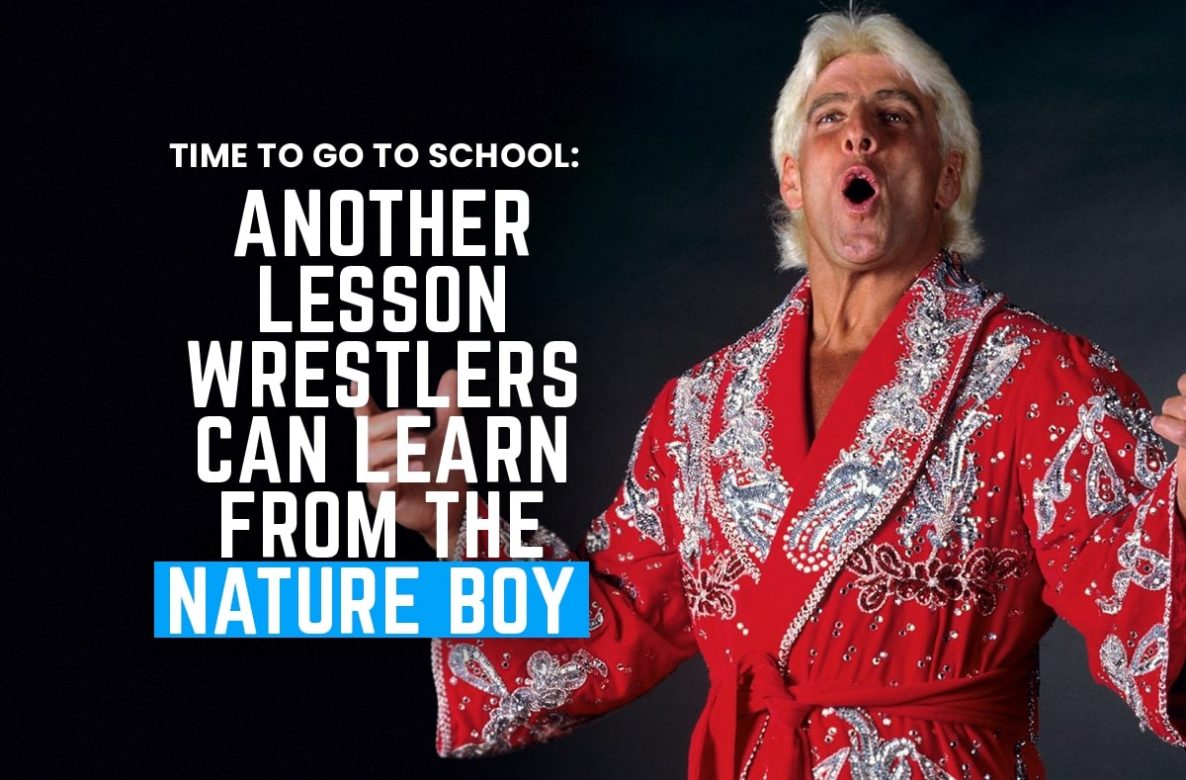 He’s arguably the greatest professional wrestler of all time.

He is the kiss stealing, wheeling, dealing, limousine riding, jet flying son of a gun and whether you like it, or you don’t, learn to love it, because he’s the best thing going today.

You probably let out a “Whoo!” or at least thought about it, reading that last sentence.

He’s Ric Flair, and his influence on professional wrestling is immeasurable. There is so much wrestlers, and would-be wrestlers can learn by watching Ric Flair’s matches and interviews over the years. Flair has even transcended wrestling, and in a funny twist, seems to be more of a pop culture icon today than even Hulk Hogan, the man who was the biggest mainstream wrestling star during Flair’s prime years. Slick Ric is still the measuring stick for many in the industry, which should come as no surprise. He’s everything a pro wrestler wants to be. Respected, well-known, with matches and interviews that fans still talk about decades after taking place.

However, there’s something else wrestlers (and honestly, all of us) can learn from Ric Flair. See, the Nature Boy is the poster child for living the good life… but he is also the case study on what happens when the bill comes due. This isn’t a criticism on an icon, because Flair’s mistakes aren’t unique to him. Wrestling, like other sports and forms of entertainment, is full of stars who made big money only to be left wondering where it all went. Even those who never have a spotlight on them can make these financial mistakes. However, in the case of Flair, his spotlight has emphasized it, making him the one that people discuss (and can learn from).

So, what were the financial pitfalls that Flair, and others, have fallen into? Let’s take a look.

Keeping Up Appearances. Obviously, the World Champion needed to look good, so the custom-made suits and alligator shoes were a necessity for Ric Flair, right? Perhaps, but Flair would often take things up a notch (and expensive notch) when competing with his contemporaries. Fellow Four Horseman Tully Blanchard has noted in several interviews that spending money was almost a competition between wrestlers in the 80’s. Houses, cars, watches, suits… if someone had a nicer car or timepiece, Flair had to top them, spending that much more just to win the ego battle. He’s not the only person in the wrestling business who has felt they had to dress nicer, have more toys, etc. than those around them in the locker room.

Want not, waste a lot. In the 1980’s, when the NWA World Champion was constantly on the road traveling to different territories, Flair adopted some road habits that cost him considerable amounts of money. No, I am not referring to partying and drinking (although that didn’t come cheap either). Several people who traveled with Flair over the years have noted how Flair often traveled surprisingly light, and would just buy whatever he needed at the moment. Every day he arrived in a new town, he would go to a store and buy toiletries (toothpaste, toothbrush, hairbrush, shampoo, etc.). He would use the items once, then leave them in his hotel room, repeating the process in the next town. Former referee Bill Alfonso has told a story of collecting Flair’s items during a week-long run in Florida, and at the conclusion of the trip showing Flair a garbage bag filled with barely used items that he purchased multiple times. Yes, Flair was earning in the neighborhood of reportedly $700,000 a year at the time, but spending tens of thousands a year on toothpaste and shampoo is still crazy.

Believing it will never end. When Ric Flair and Eric Bischoff butted heads in April of 1998, Flair disappeared off WCW television for about five months. Supposedly, during one of their exchanges, Bischoff commented that “I hope you saved your money” implying that Bischoff was going to use Flair’s WCW contract to sit him at home and not make any money by not booking him on events. Flair would later reveal that at the time he never thought he had to save money because he always had cash coming in. Now, while Flair’s temporary revenue drought was unique in this case, he is not the first wrestler to believe the big paydays will go on infinitely. Every career ends at some point, and the revenue drops.

Celebrity Net Worth estimates that Ric Flair is worth approximately $3 million, which includes his home. However, he made $700,000 a year for the better part of two decades. Fox News has claimed that during the boom period of the late 90’s, Flair made almost $2 million. Was it the above pitfalls, mistakes anyone could make, that drained his money? Yes, and no. There was also the famous partying, which has been well documented numerous times elsewhere. In addition there were other issues that the Nature Boy has been dealing with. These are more unique to Flair, but still can happen to others.

It is pretty well known that Flair has been divorced four times, most recently in 2011, and has to pay alimony to all of them. On top of that, Flair has had several bad business decisions that drained his funds further. Ric Flair Finance, formed in September 2007 as a loan referral service, was not licensed. The company was shut down in North Carolina, and Flair’s partner in the venture ended up suing Flair for not paying back a loan Flair had taken from him.

Flair also had battles with the IRS regarding unpaid taxes, which lead to them garnishing his wages and putting a lien on his estate. Flair also had to sell off a number of possessions in order to pay the back taxes, including many of his wrestling belts and robes, along with sports memorabilia he had been gifted with over the years. The IRS issues seemed to lead to more problems for Flair, including a publicized lawsuit with wrestling merchandise company Highsports, Inc. The company had made a deal to sell Flair’s NWA World Title belt, only to find out it was being used as collateral for a debt, and thus wasn’t Flair’s anymore. Flair borrowed greatly from Vince McMahon in recent years, with Flair admitting during an interview with Steve Austin that he actually didn’t get paid for his famed Wrestlemania XXIV match with Shawn Michaels. His paycheck for the match went right to Vince.

This is why, at 70 years of age, Ric Flair continues to work and make appearances. Yes, part is because he loves to. However, he also HAS to.

Does Ric Flair regret the life he had led? Only he knows the true answer, but most feel he wouldn’t change a thing when it comes to his “Natchin’” lifestyle. It was all worth it for the experiences he has had. That said, there are lessons to be learned from what he has done. Few wrestlers will have the longevity (and earning power) as a top performer that he has, so it would behoove them to be a little bit wiser when traveling the world and getting ready to “walk that aisle, and style and profile.”