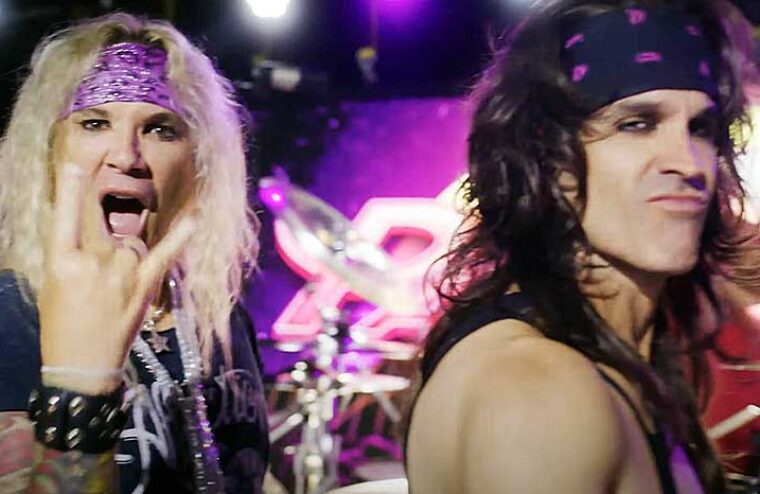 Glam metal rockers/jokesters Steel Panther are gearing up to release their new album, “On The Prowl,” on Feb. 24 of next year. A press release for the album reads: “From the opening synth intro of “Never Too Late (To Get Some P*ssy Tonight)” to the thunderous outro of “Sleeping On The Rollaway”, Steel Panther is back with the infectious riffs, pounding drums, unforgettable vocals alongside the witty humor that has earned them a global audience.”

“Songs like “On Your Instagram”, “Magical Vagina” and “One Pump Chump” are sure to fit in on the biggest live stages next to the band’s most memorable songs. “1987” is an incredible retro look at that unforgettable year and the band even slows things down on the reflective “Ain’t Dead Yet”. The first single from “On The Prowl” is the memorable “Never Too Late (To Get Some Pussy Tonight)”.

The band also released the NSFW video for the album’s single. Drummer Stix Zadinia said of the song/clip: “The song and video are an absolute public service announcement. People have been asking Steel Panther for advice on life, love and the pursuit of happiness for decades. ‘Never Too Late’ is a reminder to never give up, follow your heart, realize your dreams, overcome your challenges, navigate the rough seas, reach for stars and any other cliché you have in your pocket. Basically, what we are saying it is never too late to get some p*ssy tonight.”

The band announced last month the addition of a permanent bassist, Spyder. He replaces longtime bassist Lexxi Foxx. Singer Michael Starr told the “Everblack” podcast that the group’s former bassist was doing well since leaving the band. “I just talked to him today,” Michael said. “He’s doing good, man. He did exactly what he wanted to do. He started a family. He’s living in Chicago. Him and his wife just had a baby. So Lexxi Foxx is not gay. I thought he was gay this whole time. It’s so weird.”

“The party never stops. Just because he’s not on tour doesn’t mean he’s not f*cking having a good time. And we miss him. I f*cking miss him. And we still stay in touch and talk. We talk just about every other day — just stay in touch with one another. I mean, we were together for 27 years, 26 years, and we know each other’s moms and dads and all of our cousins. We know everything about one another. So it’s been really, really sad not having him in the band, but I understand why he’s doing what he’s doing. And he was one of the smart guys — he saved up all his money. Not me — I’m still living at my mom’s. Let’s go.”

Starr also spoke about the band’s new bassist, Spyder. “He’s a super-close friend of the band,” Starr said. “We’ve known him for years. As a matter of fact, [Steel Panther guitarist] Satchel and I were in a Van Halen tribute band for a while, and Spyder was the bass player in that. We have a rich history with him… He did all of Europe with us and he did a great job.”