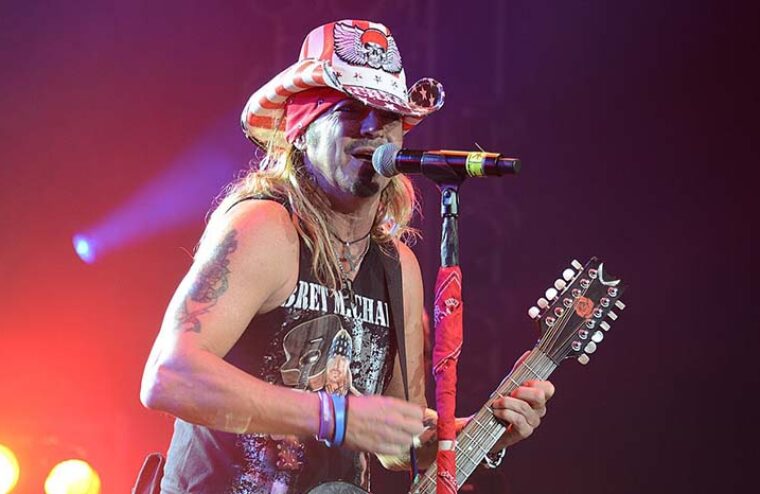 Mötley Crüe, Def Leppard, Poison and Joan Jett & The Blackhearts kicked off the long-awaited Stadium Tour earlier this month in Atlanta. Unfortunately the tour suffered its first hiccup when Crüe drummer Tommy Lee was unable to perform a full set for a number of concerts due to pain from broken ribs suffered just prior to the tour. However on Tuesday, he performed a full set for the first time on the stop in Charlotte, North Carolina. His wife revealed he suffered a “scary” injury when he broke his ribs falling down the stairs of a rental home while Mötley Crüe was in rehearsals.

“Tommy was trying to carry all of our luggage for us. And he fell down these crazy stairs and broke — broke — four ribs,” wrote Lee’s wife Brittany Furlan. “Not fractured, not bruised — broke. And it was crazy, ’cause I came out and he couldn’t breathe. It was really scary. He was on the ground [and] he was gasping for air.“

On Thursday, the tour suffered another setback when Poison frontman Bret Michaels fell ill and the band was forced to cancel its performance in Nashville, Tennessee. His Poison bandmates announced from stage that he was hospitalized from “an allergic reaction to medication.” Metal Sludge reported that Michaels may have been suffering from laryngitis or C*VID. Poison officially released a message to meet and greet ticket holders that stated due to someone in the Poison touring party having C*VID, the meet and greet portion of their evening would be canceled. That message also stated the band would perform, but that obviously didn’t come to fruition.

Late Thursday, Michaels took to Twitter to post an update: “To the incredible fans in Nashville, thank you for all your well wishes!! I was truly fired up to get on stage in the Music City and perform, but due to an unforeseen medical complication & following hospitalization, it was not possible. I send my deepest apologies for being unable to rock the stage tonight!!! I’m working on being back 100% very soon & hope you rocked hard with my friends Motley/Leppard/ Joan and Classless Act!!!”

With perhaps the exception of Def Leppard’s Phil Collen, Michaels is the most in-shape performer among everyone involved with The Stadium Tour, but he has long battled health issues relating to his Type 1 diabetes. Numerous show reviews of Poison on the tour have been glowing with the band largely being considered the most consistent and energetic act thus far. Michaels has long been a champion for diabetic causes, St. Jude Children’s Hospital, PetSmart charities and more. The Stadium Tour’s next stops include Florida on Saturday and Mississippi on Sunday.