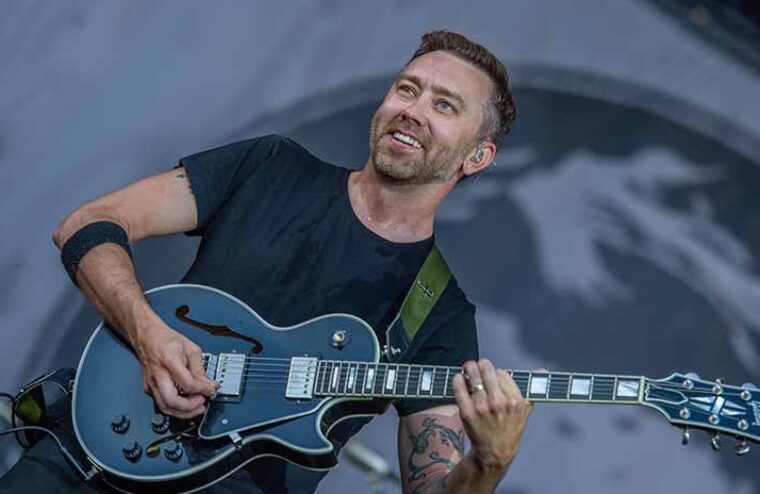 Punk rockers Rise Against are currently on the road in Europe. The band formed in 1999 and their major label debut, 2004’s “Siren Song of the Counter Culture”, garnered them mainstream success on the back of singles, “Give It All” and “Swing Life Away.” The band’s 2006 effort, “The Sufferer & the Witness”, reached No. 10 on the Billboard 200.

Recently, Rise Against frontman Tim McIlrath suffered a mishap on stage when he fell into a stage gap but kept singing. He suffered minor injuries and shared images of the aftermath of the fall. The incident happened on June 14 in Hungary. McIllrath suffered cuts and abrasions on his chest and arms. He also told Loudwire exactly what happened.

“There was a gap between the stage and some bright lights, and I totally spaced and took one big confident step into the void and then found myself trapped in a crevasse of stage and speakers,” he said. “My chest absorbed the impact and I didn’t really feel it until later. At the time, my instinct was to just keep rolling, and so I squeezed through the speakers and just went into the crowd to sing with them. Zach [Blair] and Brandon [Barnes] didn’t even see me fall and figured I’d gone down there on purpose. Nothing is broken, just bruised up pretty good so we’ve all had a good time laughing at the video!”

Rise Against performed June 19 at the Hurricane Festival in Germany. The band is set for a June 23 appearance at Hellfest in France on a bill that includes Metallica, Scorpions, Faith No More, Volbeat and Guns N’ Roses. Rise Against also released the song and video for “Last Man Standing” earlier this month.