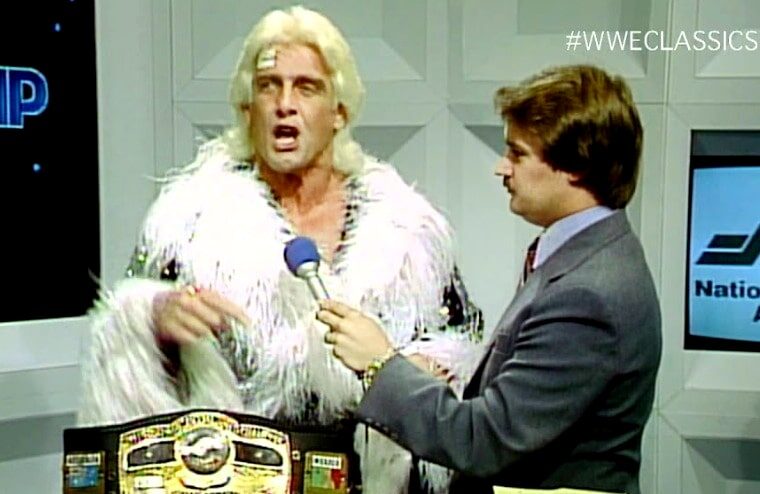 Ric Flair departed WWE in August, and it had looked certain he was set to join his son-in-law Andrade in AEW. However, an episode of Dark Side of The Ring focusing on the Plane Ride From Hell the following month would see any chance of that happening quickly fade. Although Flair’s antics had been known for decades, it had always been regarded as Flair being Flair.

However, an interview with one of the women who claimed to have experienced his behavior firsthand would put a new perspective on things. Flair would subsequently lose endorsements contracts, have bookings canceled, and WWE would stop selling his merchandise and removed him and his signature Wooooo from their introduction.

It should be noted that Flair has always denied the allegations made against him, and the legendary wrestler is now attempting to rebuild his career and restore his name. One way of doing this is via his just launched Woooo Nation Uncensored podcast, and in an attempt to build interest in his second episode, he has revealed that he has asked WWE to return the two title belts they hold.

While the story behind the Winged Eagle belt isn’t publicly known, the NWA Championship belt that Flair is holding in the photo would be the basis of controversy a decade ago. This is because when Flair took out a loan with Highspots.com owner Michael Bochicchio, he put the belt up as collateral. When Flair defaulted, Bochicchio attempted to sell; however, it would later become known that Flair had put the same belt up as collateral for a previous loan from a plumbing and heating valve company. This meant Bochicchio didn’t have the legal right to sell it, and a lawsuit would follow. Eventually, WWE would step in and settle the debts, so the belief is this gave them ownership of the belt, so it will be interesting to hear Flair’s side when the podcast drops.