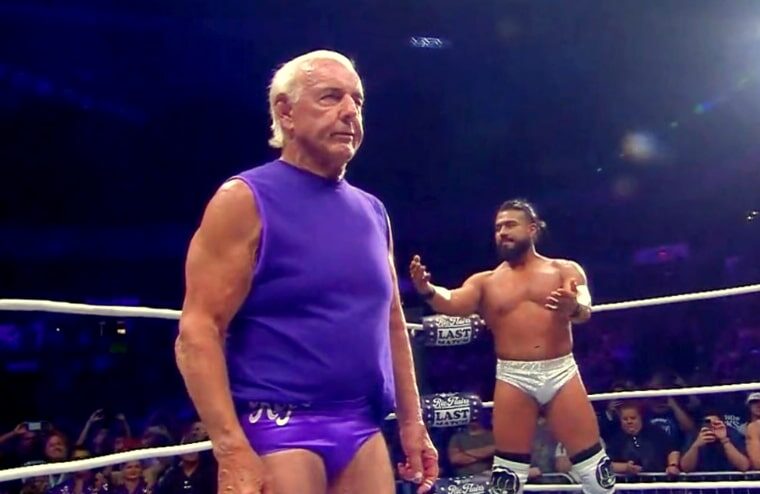 Sunday night saw 16-time world champion Ric Flair come out of retirement at 73 years of age to team with his son-in-law Andrade El Idolo against Jeff Jarrett and Jay Lethal. And while the tag contest was far from a classic, it was a celebration of a career that has spanned decades, continents, and thousands of matches. Although the allegations made against the WCW legend during the Plan Ride From Hell episode of Dark Side of the Ring now cast a shadow over his legacy, he is undeniably one of the greatest pro wrestlers of all time. So due to this, I was supportive of him having one final moment in the spotlight. Yet what I saw didn’t leave me wanting more, and I was left relieved when the match was over, and Flair exited the ring on his own two feet.

Given that Flair received arguably the greatest ever sendoff given to a wrestler back in 2008, following his WrestleMania contest with Shawn Michaels, this match shouldn’t have been necessary. But, unfortunately, Flair spoiled it due to money mismanagement, and he’d return to the ring just 18 months later as Hulk Hogan’s Hulkamania tour of Australian opponent, putting over his long-term rival four times over a week. Inevitably, this led to him wrestling for TNA in 2010 and 2011 in a run that is best forgotten and concluded in a below-average match against Sting on a random episode of Impact that appeared to be heavily edited.

Thankfully for Flair and his countless fans, he was given a second opportunity to go out on a high and considering everything he has given the business, he deserved it. Yet considering how frail he looked during the closing stages, he clearly shouldn’t wrestle again. Hopefully, though, Flair got what he needed out of the match, whether it be emotionally or financially, and he can now enjoy his twilight years. Otherwise, I fear Raw or SmackDown will be opening with another in memoriam tribute package sooner rather than later.