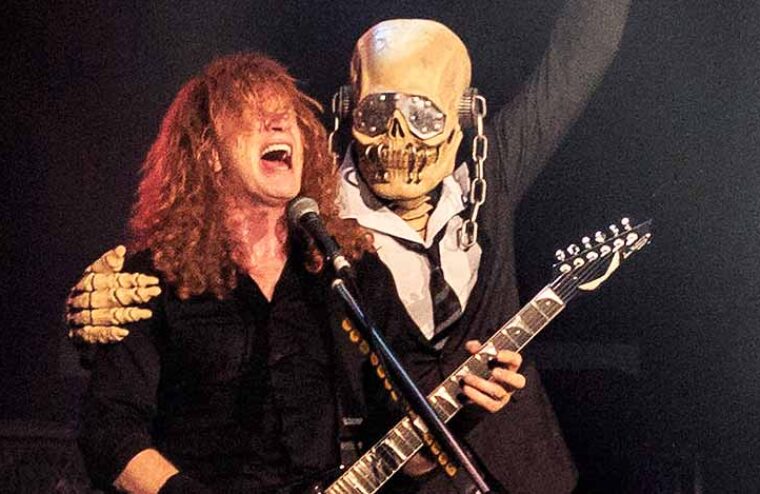 Megadeth is currently on tour in North American with Lamb of God, Trivium and In Flames for “The Metal Tour Of The Year,” and the band’s forthcoming album, “The Sick, The Dying, And The Dead,” is due on July 8. The follow-up to 2016’s “Dystopia” features two cover songs — Dead Kennedy’s “Police Truck” and Sammy Hagar’s “This Planet’s On Fire.” The latter features vocals from Hagar himself. During the band’s May 6 concert in Nashville, Tennessee, Dave Mustaine admonished a security guard just prior to the band launching into “She-Wolf”

“Hey, Mister Security Dude. You there. Stop interfering with our show. Okay?” he said. “You don’t need to go up on the f*cking barricade and point at people. Everybody’s having fun. Cool it or I’ll ask for you to be taken out of the pit. Do you understand me? Do we have a f*cking understanding here? Don’t do it again.” Mustaine paused for a few seconds before adding: “I’m sorry, you guys,” he said. “It’s just I don’t want your show to be f*cked with by a bunch of f*cking people that don’t know why they’re here.”

About a month ago, Mustaine also made headlines when he took issue with people that object to his stage banter. “The last couple of nights I’ve been talking from the stage,” he said. “It’s been a long time, and we’ve all been waiting for live music again. And there’s some people who have taken exception to some things that I’ve said from the stage the last couple of nights. And I thought to myself, ‘Well, if you don’t like what I’m saying, why are you at a Megadeth concert?’ If you don’t like what I’m saying, f*ck you. First Amendment, right? Freedom of speech. F*ck you. That’s what I say. Don’t take sh*t from anybody ever.” Mustaine also recently revealed to Loudwire his favorite Megadeth album. As for his favorite Megadeth record? “Taking this record (‘The Sick, the Dying, And The Dead!’ off of the list, I’d have to say my favorite Megadeth record up to this one is probably ‘Rust in Peace’ or ‘Dystopia.’”