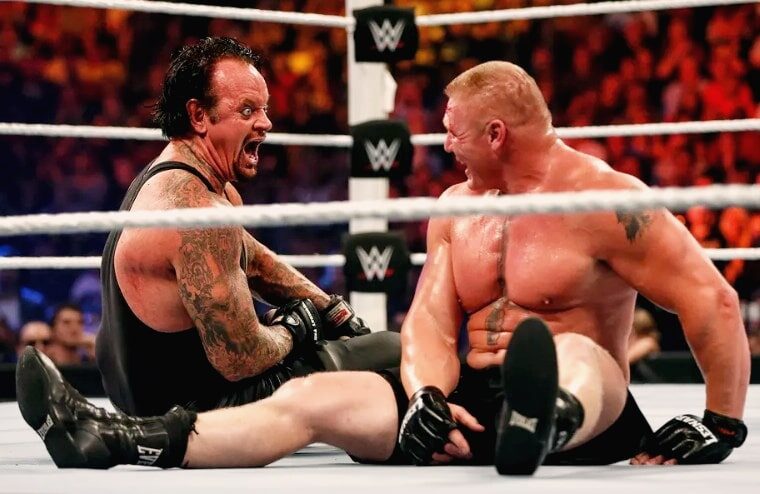 30 years of the Undertaker.  The greatest character in the history of professional wrestling?  Probably.  One of the most memorable? For sure.  There’s no doubting the success of the Undertaker and the impact he has had on the industry.  That said, it has often been said that you don’t wrestle yourself in the ring.  Every top star needs opponents to make those memories with, and the Dead Man is no exception.  I fully expect numerous disagreements with me but as someone who witnessed Undertaker’s entire WWF/E run as it happened, this is my pick of his greatest rivals.  These are the guys you will be watching when you decide to go back and check out the Undertaker’s greatest matches…..

…. Oh yeah, I said matches.  See, Undertaker had plenty of great “moments” that fans will look back on, but for this column, I’m looking at the opponents that delivered with the Undertaker when the bell rang.

The greatest Wrestlemania match of all time… and the greatest Wrestlemania match of all time (arguably).  Whether you are a “2009” or a “2010” guy, there is little doubt that the Showstopper and the Deadman delivered two of the best matches ever on the biggest stage there is.  A decade later, many fans still talk about those two bouts (and the great Royal Rumble appearances that set them up deserve mention as well).  Amazingly, they had incredible matches long before that, with the very first Hell In The Cell long sitting atop lists of Taker and HBK’s greatest matches ever.

I can already see the emails being written, disagreeing with me putting the Olympic Gold Medalist above Mick Foley and Triple H.  I get it, the Angle-Undertaker rivalry was not as long and not as heated as those.  However, the matches were excellent and very different than other Undertaker feuds.  Unlike other battles where it was about violence, strength, or kicking out of finishers, Taker-Angle was about WRESTLING.  It allowed the Undertaker to show a different side of his style, and I would argue that the No Way Out 2006 battle between them was possibly Undertaker’s greatest performance in defeat ever.

In 1996, the man known as Cactus Jack was brought into the WWF and repackaged as Mankind to feud with the Undertaker.  It was a match made in heaven… if your idea of heaven is some seriously sick bumps.  Obviously, the Hell In The Cell falls in 1998 come to mind immediately, but the two had an incredible series of brawls in 1996 that entertained fans and set the stage for the versatile Mick Foley to become one of the most beloved characters in the history of the company.

How do you provide an encore to the incredible back-to-back Wrestlemania classics that The Undertaker had with Shawn Michaels?  Apparently, the answer is to let Triple H have a crack at it.  There was no way they were going to match those two bouts, but it didn’t stop The Game and The Deadman from delivering two more Mania classics.  The chemistry in the ring between Triple H and Undertaker goes back a decade, with many feeling their 2001 Wrestlemania match was one of the few times fans truly believed the “streak” might come to an end (and this was when many felt it never would end).

A name that rarely gets mentioned when people talk about Undertaker’s best opponents makes me think many people ignored the year 2008.  Undertaker’s feud with Edge, who was arguably at his peak at that time, provided a ton of great matches, including Taker’s World Title win in front of 74,635 fans in Orlando, a Table, Ladders, and Chairs match and a Hell In A Cell match to end the feud. It was also a unique situation where Undertaker was, in a way, the underdog, as Edge had Smackdown General Manager Vickie Guerrero stacking the deck against the Deadman as often as possible.

If there is no Undertaker, there is no Kane.  Of course, every trivia geek likes to point out that The Undertaker was called “Kane” for his initial appearances, and avid fans like to point out that Undertaker wrestled the future Kane when he was known as Unibomb in Smoky Mountain Wrestling in 1995 (a rare Taker appearance outside of WWF).  The on-again, off-again feud between the Brothers Of Destruction has resulted in a dozen or so major singles battles and ran the gamut from straight-ahead brawls to unique gimmick matches.

Brock Lesnar ended the Undertaker’s Wrestlemania streak.  He is also the only man to defeat The Undertaker in a Hell In A Cell match twice. This might give Brock the nod as having the greatest success against the Undertaker in big matches.  While the Wrestlemania 30 match in 2014 might be the most famous bout between the two, I would argue that it is not the best (probably partly due to Undertaker having a concussion for a large part of it). Their 2015 matches surpassed it from an in-ring standpoint, and there’s a lot to be said for their bouts during Lesnar’s first WWE run as well.

Much like Edge’s run with the Undertaker in 2008, Batista’s rivalry with the Deadman was mostly confined to one calendar year.  So much is made about Batista’s feud with Triple H, but 2007 was all about him battling the Undertaker in a great series of bouts.  It was a unique match, as Batista was presented as someone who could go blow-for-blow with Taker and not back down.  Batista even scored a win in a singles Hell In A Cell match, something only Michaels, Lesnar and Kane can also claim.