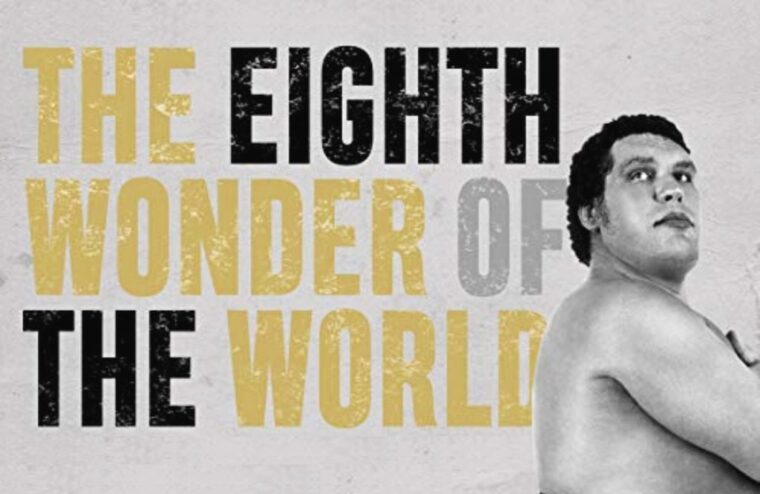 I have a love-hate relationship with professional wrestling books in general.  Since Mick Foley’s first (excellent) autobiography broke open the genre to mainstream audiences (and opened eyes to how much money they can make), there have been great wrestling books… and horrible ones.  On one end of the spectrum, they provide unique insight into the business and the people that make it happen.  On the other end… well, to be blunt, a lot of them are full of lies and made up crap.  I suppose, much like shoot interviews and documentaries, you could say they are told from that person’s perspective… but sometimes they just aren’t the truth.

“Would you like a copy of the Andre The Giant book to review?”

As a ten-year-old kid growing up in New York in the 80’s that was way taller than everyone else in his school, I gravitated towards Andre when I first started watching wrestling.  He’s always been one of my all-time favorites, to the point that when I was in talks about contributing to this site, the webmaster remarked “You’re not going to write about Andre all the time, are you?” My fandom of Andre is well known by anyone who knows me.  Less known is how much it annoys me that there is so much incorrect information about Andre’s life and career, made worse by repeated telling of incorrect stories and events.

I agreed to have a copy sent to me, but I made no guarantee of a review.  I saw the authors were Betrand Hebert and Pat Laprade, which I found interesting.  On the one hand, Hebert was involved in producing the excellent Maurice Vachon and Pat Patterson books.  On the other, Laprade was involved in the HBO documentary on Andre, which was entertaining… but also felt devoting a whole segment to Andre’s flatulence was a good idea. I was hoping the book would be filled with more solid content, and less gas.

The book arrived… and I let it sit on my desk for a while.  There are numerous reasons, but the most important is that I really didn’t want to be disappointed by another Andre story that ignored most of his career and boiled everything down to “He was big… he did Princess Bride… he drank a lot… he lost at Wrestlemania III… his back was bad… he died in France.” Finally, I relented and began reading the book.

As a major Andre fanatic, I can give the book my honest recommendation.  In fact, I would rank it up there with Foley’s autobiography and the Bruiser Brody book by Larry Matysik and Barbara Goodish as one of the best wrestling books I have ever read.  So many Andre books, articles and documentaries seems obsessed with either building up his legend or tearing it down, yet this book took a different path… it searched for the truth.

The first half of the book follows a very linear timeline, while in the later chapters it bunches things together out of order based on topic, like his daughter, the two racially charged run-ins with Bad News Brown and Kamala, or his fondness for pulling ribs on fellow wrestlers.  As a result, a casual fan might find themselves skipping ahead in the first few chapters.  For those who don’t, you get the most incredible detailed look at Andre’s early days in Montreal that I have ever read.  His pre-WWWF days are always skipped over, it was nice to see them finally recognized.

The authors spoke with many of the still living major players from Andre’s life and pulled quotes from other sources for those that sadly are no longer with us.  Unfortunately, some stories and confirmations of events are lost to time forever.  Was Dusty Rhodes’ “The Giant pissed on the American Dream in a bordello” story really true?  Who knows, but to its credit, the book openly admits when things just cannot be confirmed.  At the same time, it does dig through and clear up numerous misconceptions about stories that have grown larger and larger over time (like Andre’s weight).

Is the book perfect?  No.  There are two mistakes that jumped out at me, although in fairness, one wasn’t even about Andre. At Wrestlemania III, Hulk Hogan was not the only wrestler to walk to the ring instead of using the motorized carts as the book claims. Roddy Piper also walked to the ring that day. Depending on who you believe, it was because the cart was malfunctioning or because Piper wanted to soak in the crowd for his last match (at the time). The other error was a quote attributed to Bret Hart who said Andre was left off the Summerslam ’89 card. While he was not in the main event picture, he was not left off the card. He teamed with Big Boss Man and Akeem vs. Hacksaw Duggan & Demolition on the show.

The above are minor complaints, obviously.  One of the only other drawbacks to the book for me (besides going from linear to bunching stories), is that it felt like they skirted around some of his international stuff, particularly his appearances in Germany and other countries.  That said, it did devote a lot of time to his early Japanese career, which thanks to YouTube a lot more fans are becoming aware of now.  Seriously, look up Andre using the Tombstone and a variation of the Pedigree long before there was an Undertaker or Triple H.  There was also a forced reference to NXT in the book when discussing TV tapings that seemed out of place, as if the authors felt they had to bring up a modern show.

However, those few drawbacks don’t take away from the incredible job they do in documenting Andre’s life, career and struggle with the acromegaly that made him famous, but also led to his shortened life. I was particularly impressed with how they covered his post Wrestlemania III career.  So many Andre bios act as if the loss to Hulk Hogan at the Pontiac Silverdome was the curtain dropping on his time in the ring.  Andre’s final match was in December 1992, well over five years later, and a month before his passing on January 28, 1993 (the book even goes into the confusion regarding his actual date of death).

Andre The Giant passed away 27 years ago, yet he remains one of the best-known figures in the history of professional wrestling.  This book does his career and life justice and makes up for a lot of distortion both have suffered through over the years.

The Eighth Wonder of the World: The True Story of Andre The Giant by Bertrand Hebert and Pat Laprade is available from Baker & Taylor Publisher Services in the United States and Jaguar Book Group in Canada from ECW Press.