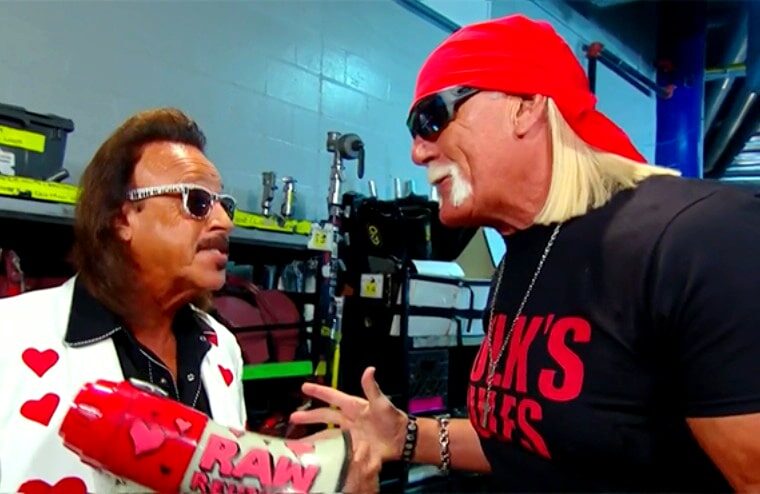 Hulk Hogan exited the ring in January 2012 following two six-man tag matches in the UK while touring with TNA. Due to that, over the years, fans had hoped to see him return to wrestle one last time to get a proper send-off. Unfortunately, though, years of slamming giants and performing leg drops have left his back, knees, and hips in a bad way, and there have been reports of him struggling to get around.

Now though, Hogan’s longtime friend and business associate Jimmy Hart has provided an update on his mobility during an interview with the Stories with Brisco and Bradshaw podcast. He would confirm that 68-year-old Hogan is undergoing physiotherapy and can get around pretty well nowadays. He’d also indicate that fans still love him and can still cut his famous promos.

After 12 back surgeries, hips, and knees, he’s doing so much better. He’s been taking this therapy every week, and it’s been really improving him more and more so he can get up and get about pretty good now. He still looks good. He always has the hair and has the tan. His upper body is unbelievable. He always looks the part. He can still do an interview at the drop of a hat. He knows what to say and when to say it. He is such a magnet. People love him no matter where we go. It’s crazy.

Given Hogan’s age, it isn’t realistic to think he could compete again. However, even in a non-wrestling role, he has shown he can still draw for WWE, as along with Ric Flair, he helped deliver 2.13 million viewers and a 0.68 in the 18-49 demo back for Raw Legends Night in January 2021. Proving nostalgia is a big deal in wrestling, and past stars will always have a place in the current product.