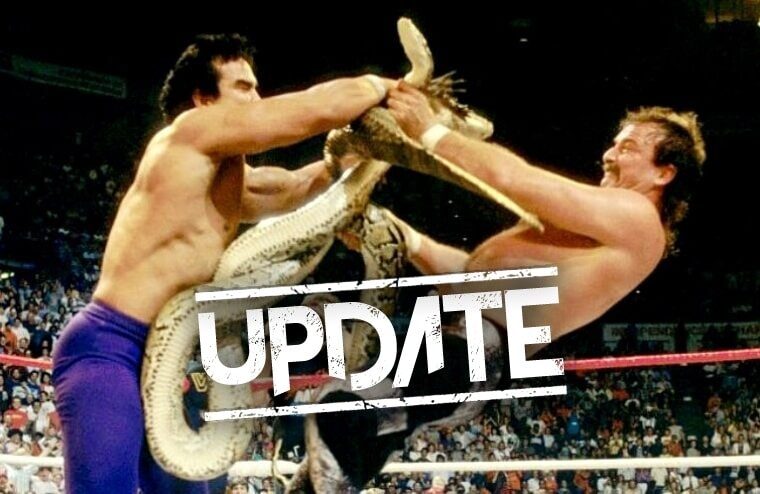 On a recent episode of DDP and Jake Roberts’ DDP Snake Pit podcast, the pair would talk about their legendary finishing moves. During this, Roberts would discuss the DDT he gave Ricky Steamboat on the concrete floor during Saturday Night’s Main Event in 1986, saying he begged not to do it. This was because he felt it couldn’t be done safely, which he was ultimately proven right over as Steamboat was legitimately knocked out. He would then follow up and say he’d heard Steamboat was in poor mental health due to this and was concerned that the incident was responsible.

Now, in the latest episode of the podcast, Roberts has revealed that he was incorrect and that Steamboat’s health is fine. Roberts would then blame someone else for giving him false information but acknowledged he shouldn’t have commented without checking the facts. He would also add that he has reached out to Steamboat but hasn’t heard back and is now uneasy about their friendship.

Number one, you should never talk about someone unless you check the facts. I said that I had heard Ricky was having problems with the mental aspect. I did it out of concern and love and fear, fear that I had been the reason, maybe, that he was having problems. The good news is he isn’t having any problems. I repeated something that I heard from what I thought was a very good source, someone who spends time with him, and I was totally wrong in doing it. I’m ashamed that I did it. But man, I am so scared that I’m going to lose my friendship with him. I’ve reached out with no luck.Jake Roberts

It always seemed a stretch to think head trauma from 1986 could be the causing Steamboat health issues 36 years later, although it is known old head injuries can linger for decades. Thankfully though, Steamboat is okay and recently disclosed that he was offered a chance to come out of retirement aged 69 to wrestle Ric Flair’s final match. He would, though, decline this opportunity, as while the payoff was said to be significant, he didn’t want to risk spoiling fans’ memories from his previous comeback where he wrestled Chris Jericho.